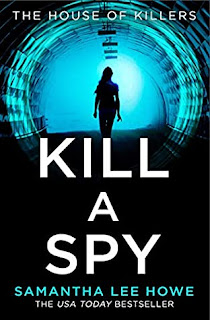 This is not a stand alone novel at least it wasn't for this reader and review.  It was hard to understand all the different characters and the romance didn't really make any since. That being said Samantha Lee Howe is a must read author. The authors ability to story to tell a spy story will have fan of Jason Borne, and James Bond head over heel in love with her.

The story moves along quickly meeting characters from other books who are in the spy and double spy world.  Each chapter is told though a different character in the book which will take some times getting used (at least for this reader).

Kill A spy kills in back story that will fill in any questions readers have. The author is at the top of the game with her writing, story telling I can't wait to read book 1 and 2 of the House of Killers series.

The house of killers always had one objective: to train a class of warriors that would elevate the Network from the national to the international – the amateur to the elite. It was the perfect poison… Radicalisation by virtue of not knowing any different.

They never expected their most notorious child to claw his way back to the beating heart of MI5. Consumed by hurt and rage, Michael Kensington has his own objective: Neva.

But as the body count rises like a tide that will sweep them all into oblivion, Neva will stop at nothing to make him understand that everything is at stake.

Because there’s only one way to push back against the tide… Together.

USA TODAY bestselling author and screenwriter Samantha Lee Howe began her professional writing career in 2007 and has been working as a freelance writer for small, medium and large publishers, predominately writing horror and fantasy.Samantha’s breakaway debut psychological thriller, 'The Stranger In Our Bed', was released on 14th February 2020 (digital) and 16th April 2020 (Paperback) with Harper Collins imprint, One More Chapter. The book rapidly became a USA TODAY bestseller.In June 2020, Samantha signed a three-book deal with One More Chapter for her explosive spy thriller series, 'The House of Killers'. The first three books will be published in March, May and July of 2021. Pitched as 'Killing Eve' meets Jason Bourne this is a nerve shredding, enemies to lovers tale that is simmering with obsession and espionage.To date, Samantha has written 20 novels, 3 novellas, 3 collections, over 40 short stories, an audio drama and a 'Doctor Who' spin-off drama that went to DVD.In August 2020, Samantha signed a deal with production company Buffalo Dragon for the option and screenplay for The Stranger in Our Bed. The feature film went into production in November 2020 and is due for release in Summer 2021.A former high school English and Drama teacher, Samantha has a BA (Hons) in English and Writing for Performance, an MA in Creative Writing and a PGCE in English.Samantha lives in Lincolnshire with her husband David and their two cats Leeloo and Skye. She is the proud mother of a lovely daughter called Linzi.