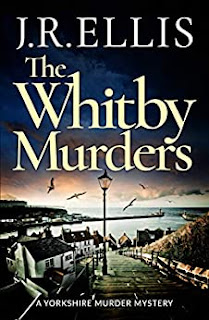 The author utilizes his extensive knowledge of Yorkshire to transport the reader to Whitby where an apparent murder and suicide has taken place. Our main character, Detective Chief Inspector Oldroyd is not the principal investigating officer and is there because his daughter was a witness and friend of both victims. Neither are satisfied with the apparent straight forward details. The investigating DI is a former DS under him and welcomes his non interfering input. His keen observations soon have them rethinking the event with successful results.

This is the second book by this author I have read and I have not been disappointed by either. I recommend this book to everyone who enjoys a British police procedural mystery. I have rated it 4 stars.
I received an ARC from Netgalley for my unbiased review.

A murder with three witnesses. But one of them doesn’t believe what she saw…Halloween, Whitby. DCI Jim Oldroyd’s daughter Louise is in town with friends for a goth festival. But their visit to an escape room ends in bloody murder when one of the group stabs his girlfriend and flees the scene. It’s a crime with three witnesses—but Louise refuses to take what she saw at face value.Oldroyd and DS Carter are called in to solve the case, assisted from the sidelines by Louise. But the closer they investigate, the more complex the web of deceit appears. This is no straightforward crime of passion.With a violent murderer on the loose, it’s only a matter of time before they strike again. And this time it’s personal. Oldroyd must expose the truth, protect his daughter and stop the horror before it’s too late.

During a long career teaching English, I wrote plays for children and occasional ghost stories. I have always been fascinated by the paranormal and by mysteries, conspiracy theories and unexplained crimes.My love of my native county is deep and the settings of my Yorkshire Murder Mysteries within Yorkshire's varied landscapes are important. I have made a study of the sub-genre of the Locked Room Mystery during the height of its popularity between 1930 - 1960 in the stories of writers such as John Dickson Carr, Clayton Rawson and Ellery Queen. I was an avid watcher of BBC's "Jonathan Creek" in its heyday. I believe the element of puzzle is essential to crime fiction and my novels contain a double mystery: the standard "who dunnit?" but also "how dunnit?!"I avoid the dark and gruesome in my writing and I strive to include some humour and elegance in style, a vivid sense of place and a compelling mystery! My characters both innocent and guilty are mostly ordinary people.I am a member of a writers' group in Otley which has inspired me to write poetry and various forms of short fiction.