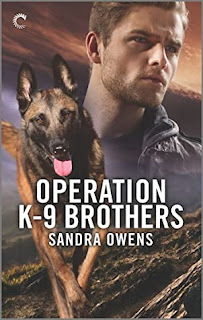 This is the beginning of what might be a interesting romantic suspense's series.   Sandra Owens uses more of the romance to tell the story and less the suspense but even with that it is a fast pace series that readers of romantic suspense novels will enjoy.

The characters are fun and readers will connect with them quickly. The author takes a topic that some might find as difficult to discuses and writes it with respect to the character development.  The author does introduce you to characters that will be coming up in the series at least I hope.  Otherwise the author has a few too many plot holes.

This is a summer read by the pool.

Thank you to Netgalley and the publisher for the advance copy of Sandra Owens Operation K-9 Brothers.

Navy SEAL Jack Daniels (save the jokes, he’s heard them all) and his trusty Belgian Malinois sidekick, Dakota, are back home in Asheville, North Carolina, after a bomb left them scarred. Unable to accept that he’ll never be able to return to his team, Jack is looking for a miracle. What he isn’t looking for is a permanent relationship, though he’s open to a no-strings distraction at the magic hands of gorgeous local potter Nichole Masters.Nichole is on a losing streak with men. Her ex-boyfriend won’t stay gone, a competitor is out to ruin her business and even her rescue pup, Rambo, is refusing to get in line. A chance run-in with a navy SEAL turned canine companion trainer might solve the dog problem. The fact Jack is easy on the eyes doesn’t hurt, either.But when Nichole feels like she’s being watched, Jack is the only person she can turn to. He’s a protector and problem solver by nature and training. Accepting his protection is one thing—Nichole didn’t count on falling in love.

An award winning author, Sandra Owens lives in the beautiful Blue Ridge Mountains of North Carolina. Her family and friends often question her sanity, but have ceased being surprised by what she might get up to next. She’s jumped out of a plane, flown in an aerobatic plane while the pilot performed thrilling stunts, has flown Air Combat (two fighter planes dogfighting, pretending to shoot at each other with laser guns), and rode a Harley motorcycle for years. She regrets nothing.