Book Review: The Heiress Gets a Duke (The Gilded Age Heiresses #1) by Harper St. George 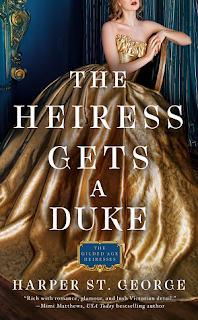 Title: The Heiress Gets a Duke (The Gilded Age Heiresses #1)

A late 1800's (1874) love story that finds an intelligent American bluestocking in London, with her family, for a season. Coming from new money, and extremely wealthy, she is aghast to find out her parents are seriously considering forcing her younger sister into marriage with a penniless Duke. This tragedy is apparently being done to achieve an elevated social status. She is determined to thwart this cruel miscarriage and ensure her sister can marry the man she loves. What will happen when her distain for this fortune hunter begins to wane?

I have rated this book 4 stars and thought it was well presented.
I received an ARC from Netgalley for my unbiased review. The above is based on my reading of the book.

American heiress August Crenshaw has aspirations. But unlike her peers, it isn't some stuffy British Lord she wants wrapped around her finger—it's Crenshaw Iron Works, the family business. When it's clear that August's outrageously progressive ways render her unsuitible for a respectable match, her parents offer up her younger sister to the highest entitled bidder instead. This simply will not do. August refuses to leave her sister to the mercy of a loveless marriage.Evan Sterling, the Duke of Rothschild, has no intention of walking away from the marriage. He's recently inherited the title only to find his coffers empty, and with countless lives depending on him, he can't walk away from the fortune a Crenshaw heiress would bring him. But after meeting her fiery sister, he realizes Violet isn't the heiress he wants. He wants August, and he always gets what he wants.But August won't go peacefully to her fate. She decides to show Rothschild that she's no typical London wallflower. Little does she realize that every stunt she pulls to make him call off the wedding only makes him like her even more.

Harper St. George was raised in rural Alabama and along the tranquil coast of northwest Florida. It was a setting filled with stories of the old days that instilled in her a love of history, romance, and adventure. By high school, she had discovered the historical romance novel which combined all of those elements into one perfect package. She has been hooked ever since.She lives in the Atlanta area with her husband and two children. When not writing, she can be found devouring her husband's amazing cooking and reading.