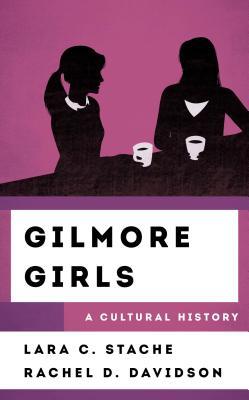 Review:
Young Women Adults watching TV 2000-2007 couldn't miss a CW series called Gilmore Girls.  The series reflected on the difficulties of being a parents, a daughter and mother with over bearing parents who want to protect those they love.
The series was full of sarcasm, romance, jokes pop culture reference that most TV shows avoided to keep from dating their TV show.
The book relives a lot of fun, exciting, heart breaking moments on the TV series.  The first half of the book a introduction to the series, characters, locations and the basic.  The second half was how the series effected those who watched the series how it opened discussion of teen pregnancies, how to raise a child, who is the adult and who is the real mother.  The mental, emotional and physical side of the series and how it effected those who watched it. It covers feminism, small town life and pop cultural of the day.
The story sugar coats the series not really taking of the harder questions of Why did the daughter sometimes have to be mom? The emotional side effects of being raised by a single mom not to mention the therapy that Lorelai and Rory really needed to find a healthy, mental life to find true happiness.
Thank you to Netgalley and the publisher Rowman & Littlefield Publishers for the advance copy of Lara C. Stache Gilmore Girls

Synopsis:
No longer just a cult classic, Gilmore Girls is a cultural staple for TV fans. Airing from 2000-2007, Gilmore Girls focused on the relationship between thirty-something single mom Lorelai and her teenage daughter, Rory. While exploring themes of family, romantic love, friendship, and life's choices, this quirky show featured fast-paced dialogue, funny quips, and a steady stream of pop-culture references. Created by Amy Sherman-Palladino (The Marvelous Mrs. Maisel), Gilmore Girls served as a launching pad for the careers of its stars--including Lauren Graham, Melissa McCarthy, Alexis Bledel, Jared Padalecki, and Milo Ventimiglia. The series' popularity was so enduring that ten years after its initial run, a revival season was released on Netflix. In Gilmore Girls: A Cultural History, Lara C. Stache and Rachel Davidson offer an engaging analysis of the popular series. The authors examine how the show serves as a representation of American culture and politics, reflects complexity within multiple mother-daughter dynamics, and employed literature, movies, and music to drive the dialogue and plot. They also explore how the choices made in the series reflect social values of the time, reinforce and challenge traditional ideas of gender and feminism, and unpack the cultural significance of this endearing series. As both a mirror and a construction of contemporary American culture, the series achieved critical accolades and became a cult classic, at once both unassuming and dynamic. This book offers new ways for fans to appreciate the appeal and value of this binge-worthy favorite as part of the larger culture in which it exists. Gilmore Girls: A Cultural History will be of interest to fans of the show as well as to scholars and students of television, media, and American popular culture.

i=stripbooks&rh=p_27%3ALara+C.+Stache&s=relevancerank&text=Lara+C.+Stache&ref=dp_byline_sr_book_1
Posted by H. Wimmer at 12:00 AM