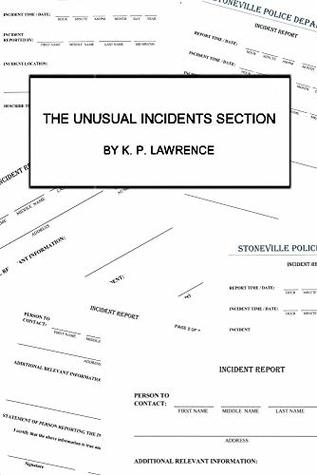 Review:
A series of Incidents, which in total, make up an interesting story. It is told by one of the characters in a straight forward manner and is meant to be entertaining and humourous at the same time. I must say I was entertained and brought to chuckles by this smooth writing author. He is British and has a quirky sense of humor that you must know and appreciate to fully understandand. Fortunately, I feel that my background and lifestyle, fill the bill in both catagories. I liked this book and the manner it was written enough to overlook some, what I consider, minor discrepancies.

I have rated this book 4 stars and would read his other offerings.
I obtained this book from Amazon in Kindle format and have provided this review without recompense.

Synopsis:
Out of work and practically penniless, Dave Armitage is forced to take a job as the civilian partner of cantankerous, old Detective-Sergeant, Hasdrubal (Harry) Higgins. Together they make up the Unusual Incidents Section of the Stoneville police.The newly-created Section is the brainchild of State Attorney-General Sweetapple, Harry’s enemy. Its official mandate is to handle cases where the law doesn’t appear to have been broken, but its real purpose is to force Higgins to retire through boredom.However once they start investigating the unusual incidents that other police don’t want to waste their time on, including the manager who walked into his office and vanished, the freeze-dried leg found in a snow bank, and the snowman who acted like a Peeping Tom, they find that real crimes are involved.