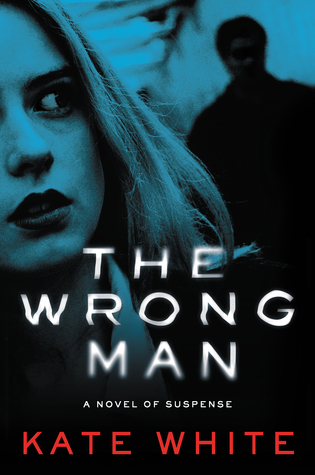 Title: The Wrong Man
Author: Kate White
Quick Review: Stars 4 out of 5
Review:   Kate White's book, The Wrong Man, starts off with Kit Finn looking for a little excitement in her life when she meets a man, Matt Healy, while on vacation that seems to push all the right buttons. When she decides to see him again in NYC, where the both live, everything takes a turn in the wrong direction. However when Matt Healy opens his door to Kit she finds it is not the same man she met in the Florida Keys.
Soon her life is turned upside down with the death of two people, her apartment being ransacked and she has no idea who would want to give her the wrong identity.
The Wrong man is a suspense filled psychological thriller that leaves the reader in so many twist and turns but if the reader stays the courses they will figure out what is going on before Kit does.
Their were many times I wanted to yell at Kit for not going to the police or moving in the other direction and I understand the author wanted to give readers a woman who could take care of herself but she missed the boat on having her use her brain and call for help when needed.
The Wrong Man will keep the readers hooked from page 1 -322 until the reader discovers the truth.

Synopsis:  New York Times bestselling author of Eyes on You and The Sixes delivers a compelling thriller of mistaken identity and psychological suspense about an accomplished career woman who thinks she's met the man of her dreams--but instead he turns out to be her worst nightmare.

Bold and adventurous in her work as one of Manhattan's hottest interior decorators, Kit Finn couldn't be tamer in her personal life. So, while on vacation in the Florida Keys, Kit resolves to do something risky for once. Flirting with Matt Healy--the rugged stranger she literally bumps into at her hotel--is one thing. Going back to his room after their date is another.

Instead, Matt offers to cook her dinner when they're both back in the city. But when Kit arrives at his luxury apartment ready for the date of a lifetime, who is the man who opens the door?

Kit's usually so good at reading people. How could she have been taken in by the deceptions of a con man? And why has he targeted her? Piece by piece, Kit realizes that this treachery goes a lot deeper, and gets a lot deadlier. Now the only way out is to expose the vicious puppet master who's turned her life upside-down.

Adrenaline-charged and filled with harrowing twists at every turn, The Wrong Man will leave readers guessing until the final page.

Author Information:  Kate White is the New York Times bestselling author of nine works of fiction—six Bailey Weggins mysteries and three suspense novels, including her latest, EYES ON YOU. For fourteen years she was the editor in chief of Cosmopolitan magazine, and though she loved the job (and the Cosmo beauty closet!), she decided to leave in late 2013 to concentrate full time on being an author.

Her books have received starred reviews from a variety of publications and she has been covered everyplace from The Today Show to The New York Times. Her first Bailey Weggins mystery, If Looks Could Kill, was named as the premier Reading with Ripa selection and soon shot to number one on Amazon. (And it’s now being made into an opera!). She is published in 18 countries around the world.

Kate is currently editing the Mystery Writers of America cookbook, a selection of recipes from many of the top-selling authors.

Like many mystery writers, Kate fell in love with the genre after reading her first Nancy Drew book, The Secret of Redgate Farm, and she still admires those cliffhanger endings that “Carolyn Keene” created.

She is married and the mother of two children, and once had her daughter stalk her through the woods so she could better describe the sounds of someone being followed.

Kate is also the author of several very popular career books, including I Shouldn’t Be Telling You This: How to Ask for the Money, Snag the Promotion, and Create the Career You Deserve, and Why Good Girls Don’t Get Ahead but Gutsy Girls Do.