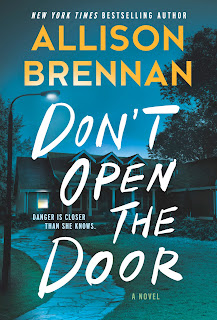 Allison Brennan hands down is one of the best mystery writers I have ever read. Her ability to pull readers in from page one and keep them readers until they have read every single book she has written. This is book 2 in the Regan Merritt series which can be read as a stand-alone novel or read part of the series.  The author catches up readers quickly so you will know the major characters right off the bat.

The characters are well developed, and each have a purpose and a reason for being in the story. The story written as readers are given answered to all their question not leaving any plot holes.

This story will not disappoint Allison Brennan fans and those seek a new mystery thriller writer.

After their ten-year-old son, Chase, was senselessly murdered, Regan's life unraveled. Her corporate lawyer husband, Grant, blamed the death on Regan’s work as a US marshal. Unable to reconcile their grief, they divorced, and Regan quit her job and moved away.Now she's back after a voice mail from her former boss Tommy said he had important news to share about Chase’s killing. Regan is stunned to learn Tommy is dead too. When she reaches out to Grant, his panicked reaction raises her suspicions. Then a lawyer with ties to her ex also turns up murdered, and the police make Grant their top suspect.Unsure of his guilt or innocence, Regan risks everything to find Grant before the police do so she can finally get the answers to all that has haunted her since losing Chase. But the truth is not even close to what she imagines—and now she fears she has no one to trust.

New York Times and USA Today bestselling author Allison Brennan believes that life is too short to be bored, so she had five children and writes three books a year.40 books and numerous short stories later, Allison relocated in 2019 from Northern California to Arizona with her husband and two youngest children.