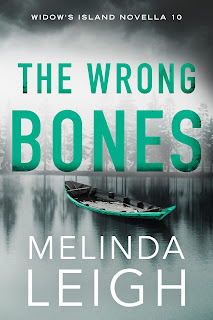 Once again Melinda Leigh and Kendra Elliot are able to bring the world of Widows Island to life that will have readers wondering what they will come up with next?

Tessa and Logan story continues, that will keep readers wanting more of the Widow Island after they finish this novella.

How is it possible for the author to put together a series that are short and to the point. Yet the author weaves a world of death, family and love using only a few short pages.

Everything readers have come to love from Melinda Leigh are pouring out of these pages.

Thank you to Netgalley for advance copy of The Wrong Bones.

Deputy Tessa Black spots a man disturbing a grave in the local cemetery and gives chase. But when Tessa catches him, she learns that the ghoulish trespasser wasn’t robbing graves; he was burying a box of bones.With the help of her fiancé, park ranger Logan Wilde, Tessa discovers that the remains belong to a missing teenager from a nearby island. After the girl disappeared nine months ago, police labeled her a runaway. Now, though, it’s clear the teenager was murdered.When the only witness is an uncooperative teenager, Tessa and Logan must find the killer before the boy becomes the next target.

Melinda Leigh is a fully recovered banker who learned that writing books is way more fun than analyzing financial statements. Melinda’s debut novel, SHE CAN RUN, was nominated for Best First Novel by the International Thriller Writers. Since then, she has garnered numerous writing accolades, including two RITA® Award nominations and an induction into the NJ Romance Writers Hall of Fame. Her novels have sold more than 10 million copies across the world. Melinda loves martial arts, rescue dogs, and sea turtles.WEBSITE: https://www.melindaleigh.com/FACEBOOK: https://www.facebook.com/melindaleighauthorpage/TWITTER: https://twitter.com/MelindaLeigh1