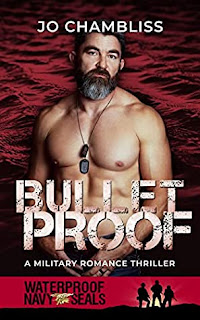 This is the first in this series I have read, and it just so happens to be the last in the series as well. The story is your typical steamy romantic suspense.  Lots of action and steamy romance when the characters are waiting for something to happen.

The story moves quickly to complete the end of the series.  The author brings in characters from her other books in the Waterproof Navy Seal series.  Recommended readers start with at least one of the books before starting book 9 if you are interested in the story line in book 9.

The book doesn't really stand out from the other romantic suspense series that will have these readers starting at book one.

Thank you to Netgalley for the copy of BulletProof by Jo Chambliss.

Spending a lifetime in the SEALs can teach a man a lot about himself. Getting shot several times trying to protect a pregnant woman can change a lot of the things you think you know… if you survive.Commander Timothy “Stone” O’Reilly did survive and now knows that he wants more from this life than a successful career and his ten-year marriage to the intelligent and beautiful Dr. Cassidy O’Reilly. He wants the family he’d never desired before. Finding out that nearly losing him has made Cass feel the same way, the two decide it's time to make a baby.With Tim recovered enough to return to his men, life is as good as it can be and about to get better with the thought of becoming a father. That is until a close friend and former SEAL teammate ends up dead under suspicious conditions.No one knows why Bishop was targeted until the killer decides to play a game with the two remaining members of the long-time trio, Commander O’Reilly and CEO Dillan “Warden” Knot.Invoking the name of a SEAL that died seventeen years ago, Bishop’s killer uses his vast reach to cast all of Tim's world into chaos before making his final move.Tim soon finds out that he’s the target on a chess board full of power players determined to destroy him. And if the enemy can’t get to Stone O’Reilly, they’ll gladly start picking off everyone else in the commander’s life. Beginning with Cass.No one is safe, not Dillan Knot and not the commander's hand-picked squad of seals, the Wendigos.

Jo Chambliss is primarily a reader of good books. Her work as an interior designer pays for her to keep well stocked in the creative adventures of her favorite authors. She lives in Birmingham, Alabama with her wonderfully crazy husband, equally crazy kids, and two cats.

Writing these stories started out as a coping mechanism; an escape from the reality of both of her parents in the hospital battling cancer. Sometime during the process, her dad passed. Her first novel, Remember Me, helped her survive all this chaos. It wasn’t going to be anything more, until her friends and family encouraged her to take it all the way.

Somewhere during the process of publishing that first book, this writing creature took over and decided that her first novel was just the beginning.