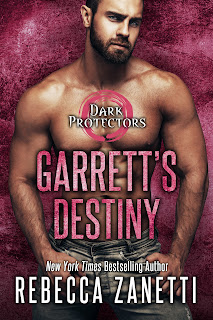 Rebecca Zanetti can write steamy supernatural romance stories that will keep a tribe of readers.  Book 15 in the Dark protectors is one that her fans have been waiting for since started reading about the Vampire Demon Karys series.

That being said the author has relied on her same story telling and the characters are the only things that changes.  The story brings readers closer to understanding the key and Seven connection to the fixing the miss they made thousands of years earlier.

That being said Garrett is as expect and the cheesy named female lead Destiny Applegate is as you expected.  Sex, I am mad do as I say, female I will do what I want and yada yada.  More sex and end! The female names are cheesy and as always everyone is beyond amazing and attractive.

I hate to say the one part of this addition to the series is it bring readers closer to the reason the Keys and lock are so important to the supernatural world.

Love and danger . . .For most of his life, Vampire-Demon Garrett Kayrs, nephew of the King of the Realm, has carried a heavy mantle of responsibility with ease and control. Fate declared him heir to the throne, Fortune marked him with the power of the mysterious circle of Seven, and Chance promised more surprises to come. Nothing deterred him from his path. Until the nightmares began--agonizing dreams of having a female, the female, his mate, on the back of his motorcycle—only to have her torn away from his protection. He feels the menace around her, the danger she’s in, and he can’t rest until he finds her . . .Duty and desire . . .Destiny Applegate bears the weight of her name with a respectful balance of fear and purpose. She has been given some direction, but not nearly enough to truly understand her duty, what she was born to do. Even as a child, she had a sense of him. The him, her mate. A dream moment or two with him that might have saved her—or possibly cursed her. So now, when he finds her, she has no choice but to jump on the back of his bike and do her best to hold on until she discovers her path—even if that means ending his.

New York Times and USA Today Bestselling Author Rebecca Zanetti has worked as an art curator, Senate aide, lawyer, college professor, and a hearing examiner - only to culminate it all in stories about Alpha males and the women who claim them. She writes dark paranormals, romantic suspense, and sexy contemporary romances.