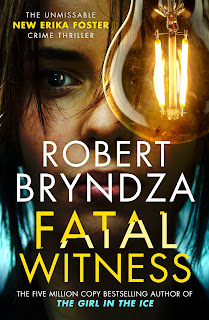 Fatal Witness is one of the books in the Dect. Erika Foster series.  The series is a police procedural series that let be honest has a long list of suspects for a horrific murder that readers will be wondering how to keep everything straight.

Robert Bryndza is hands down on of the best police procedural thriller writers I have read in a long time.  The author brings readers into his world that will have readers wondering how could have killed this person. Erika Foster is a great female lead that all readers can get behind.

Thank you to Netgalley for a copy of Fatal Witness.

How do you find a killer who has destroyed all the evidence?Detective Erika Foster is on a late-night walk near her new house in Blackheath when she stumbles upon the brutal murder of Vicky Clarke, a true-crime podcaster.Erika is assigned to the case and discovers that Vicky had been working on a new podcast episode about a sexual predator who preys on young female students around South London, staking out his victims in their halls of residence before breaking in at the dead of night. When Erika discovers that Vicky's notes and sound recordings were stolen from her flat at the time of her murder, it leads her to believe that Vicky was close to unmasking the attacker, and she was killed to guarantee her silence.The case takes on a disturbing twist when the body of a young Bulgarian student doctor is discovered in the same building, and this makes Erika question everything she thought she knew about Vicky. With very little evidence, the clock is ticking to find the killer before he strikes again

His crime debut, The Girl in the Ice was released in February 2016, introducing Detective Chief Inspector Erika Foster. Within five months it sold one million copies, reaching number one in the Amazon UK, USA and Australian charts. To date, The Girl in the Ice has sold over 1.5 million copies in the English language and has been sold into translation in 29 countries. It was nominated for the Goodreads Choice Award for Mystery & Thriller (2016), the Grand prix des lectrices de Elle in France (2018), and it won two reader voted awards, The Thrillzone Awards best debut thriller in The Netherlands (2018) and The Dead Good Papercut Award for best page turner at the Harrogate Crime Festival (2016).Robert has released a further five novels in the Erika Foster series, The Night Stalker, Dark Water, Last Breath, Cold Blood and Deadly Secrets, all of which have been global bestsellers, and in 2017 Last Breath was a Goodreads Choice Award nominee for Mystery and Thriller. Fatal Witness, the seventh Erika Foster novel, is now available to pre-order and will be published 7th July 2022.Most recently, Robert created a new crime thriller series based around the central character Kate Marshall, a police officer turned private detective. The first book, Nine Elms, was an Amazon USA #1 bestseller and an Amazon UK top five bestseller, and the series has been sold into translation in 18 countries. The second book in the series is the global bestselling, Shadow Sands and the third book, Darkness Falls, has just been published.Robert was born in Lowestoft, on the east coast of England. He studied at Aberystwyth University, and the Guildford School of Acting, and was an actor for several years, but didn’t find success until he took a play he’d written to the Edinburgh Festival. This led to the decision to change career and start writing. He self-published a bestselling series of romantic comedy novels, before switching to writing crime. Robert lives with his husband in Slovakia, and is lucky enough to write full-time.