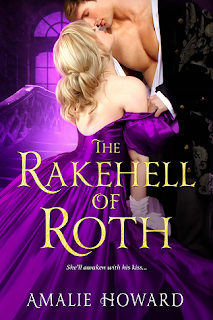 An excellent story of a battle between a cat and mouse. Both appear to want the same piece of cheese (sex) but neither is inclined to let the other win as it would make them realize and declare their own closely guarded secret. They are already married to each other so the battle lines are drawn. The reader must decide if the "moral high ground", believed to be held by both parties, should be breeched and by which individual. Who will be the ultimate winner? A delightful steamy romance to enjoy on a cold winter day.

I have rated this book 4 stars and would purchase it for friends who enjoy historical romance stories.

In this game of seduction, the rules don't apply...As owner of the most scandalous club in London, the last thing the notorious Marquess of Roth wants is a wife. Keeping up his false reputation as a rake brings in the clients with the deepest pockets—money he needs to fund a noble cause. Even though everything inside tells him not to leave his beautiful, innocent wife behind at his country estate...he must.But three years later, tired of her scoundrel of a husband headlining the gossip rags, Lady Isobel Vance decides enough is enough. She is no longer a fragile kitten, but as the anonymous author of a women’s sexual advice column, she’s now a roaring tigress...and she can use her claws.Isobel decides to go to him in London, channeling her powers of seduction to make him beg to take her back. But she didn’t expect her marauding marquess to be equally hard to resist. Now the game is on to see who will give in to the other first, with both sides determined like hell to win.

AMALIE HOWARD is a USA Today and Publishers Weekly bestselling author, most notably of The Beast of Beswick, “a smart, sexy, deliciously feminist romance,” and one of O-The Oprah Magazine’s Top 24 Best Historicals to Read. She is the co-author of the #1 bestsellers in regency romance and Scottish historical romance, My Rogue, My Ruin and What A Scot Wants, and has also penned several young adult novels, critically acclaimed by Kirkus, Publishers Weekly, VOYA, School Library Journal, and Booklist, including Waterfell, The Almost Girl, and Alpha Goddess, a Kid’s INDIE NEXT selection. Of Indo-Caribbean descent, she has written articles on multicultural fiction for The Portland Book Review and Ravishly magazine. She currently resides in Colorado with her husband and three children.