Book Review: Dark Secrets of the Bayou by Kim Carter 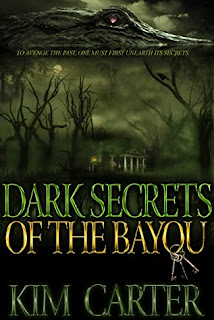 Title: Dark Secrets of the Bayou

Kim Carter created a interesting story that with the first half of the book during the 1800's with the beginning of the plantation.  The author gives readers the family history of not just the home but also of Catherine. Kim Cater was able to create the setting of dark and gloomy as part of the character in the story.  The cast of characters even the home itself is part of the characters within the story.

The chapter left cliffhangers daring readers to keeping going long into the night.

Dark Secrets of the Bayou is a creative dark mystery that reader will not be able to put down.

Catherine “Tink” Mabry, an up and coming attorney, is shocked by her recent inheritance from her estranged family on the bayou. After her mother died during childbirth, Tink’s father had quickly relocated them to the big city of Atlanta, Georgia. With no memory of her mother, she is determined to learn more about her lineage and decides to visit the bayou town of Kane, Louisiana. Candace, Tink's co-worker, and best friend agrees to make the trip with her.Before she has time to explore her family’s history or decide what to do with the declining property, local murders plague Tink’s homecoming. She quickly finds herself caught in the middle of a multiple murder investigation—and quite possibly, the prime suspect. When Candace retreats back to Atlanta, Tink finds support among an unlikely cast of characters and sets out to discover clues that have haunted and tormented her family for generations.Could a concealed crime from the 1800s, or the family's estate itself, harbor keys to unlocking the past?The more they learn, the more they question whether some secrets are best left buried.

Kim Carter is a multi-award-winning author and critically acclaimed writer of gripping suspense, chilling thrillers, and haunting historical mystery novels.Kim is widely known for her vibrant characters in her Clara and Iris Mystery series, a couple of overly curious widows who turn private investigators. These funny women were inspired by Kim's mother and her mom's best friend. Book one of this series, Murder Among The Tombstones, was a finalist for the 2018 Killer Nashville Silver Falchion Award and a recipient of the 2017 TCK Publishers' Readers' Choice Award.Carters' literary works include Sweet Dreams, Baby Belle, When Dawn Never Comes, Deadly Odds, No Second Chances, The Forecast Called For Rain, and her new release of Dark Secrets of the Bayou; her novels can be purchased online at Amazon, Barnes and Noble, BAM, and Indie Bound.Kim's writing career started after she suffered an illness that made her housebound for a couple of years. An avid reader of mystery novels herself, she embarked on writing as a means of filling her time. Her health struggles and successes have been chronicled on The Lifetime Television in early 2000, The Atlanta-Journal Constitution, Women's Day Magazine, and Guidepost.Now, with seven acclaimed mystery titles to her credit, Kim worked in many different capacities in county government. Still, it was ultimately her job as a correctional officer who provided her with opportunities to talk and interact with a diverse group of people. Her experiences ran the gamete of inspiring success stories to tragic endings, much like she writes within her mysteries.Kim began networking and made connections with numerous homicide detectives, medical examiners, and prison officials. Her research has taken her to many places, including morgues, death row, and the occasional midnight visit to cemeteries, all places to gain material for her novels.Kim is a college graduate of Saint Leo University with a Bachelor of Arts in Sociology. She is an avid reader, has raised three grown successful children; she currently resides outside Atlanta, Georgia.