Book Review: Entangling( Book One of the Kirin Lane Series) by Kelley Griffin 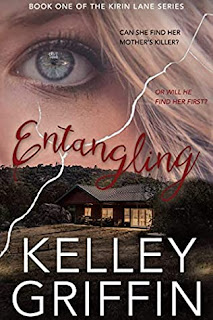 Entangling is a very predictable story and the romance was forced instead of flowing with the main part of the story.  The author was able to create a predictable romantic suspense with likeable characters.  The romance is forced and rushed though the story.

With that being said it is a easy summer read you can finish on a plan ride or sitting by the pool.

Thank you to Netgalley for a copy of Kelley Griffin Entangling.

When Kirin Lane’s father dies, it means nothing to her. Why should it? It’s been thirty years since he abandoned her after her mother’s death. But when her house is ransacked and sinister men pursue her, Kirin is forced to look to the only thing he left her for answers—a tattered Marine Corps field manual.Inside, she discovers clues that could unlock the mystery surrounding her mother’s murder, if only she can follow the cryptic information. She finds an ally in the charming and mysterious Sam Neal, who both infuriates and awakens feelings she can’t resist. But can she trust him?Sam Neal is determined not to fall for Kirin. He can’t. It’s a clause in his contract, and he never breaks a promise. But he knows too much about her. Her strength and sexy pigheadedness drive him crazy in the best of ways. Suddenly, Sam’s thinking less about obligations and more about allowing a certain woman inside his world.But with nothing as it appears and her life on the line, can Kirin untangle what really happened to her mother thirty years ago?Or will the killer’s next victim be her?

A closet romantic suspense writer, teacher, mom to five sons, wife to a Marine, and southerner by common law, Kelley Griffin began writing the old fashioned way; a fluid pen and spiral bound books of line-less paper. She's blessed to be surrounded by testosterone, laughter, family, and love everyday. Her characters will be etched in your memory long after the last page. Kelley's unpublished debut novel “Entangling” explores the journey of Kirin Lane — a comically clumsy 40 year old widow, thrust into her late father's world of corruption in order to discover the truth about her mother's untimely death.