Book Review: Watch Her Vanish (Rockwell and Decker #1) by Ellery A. Kane 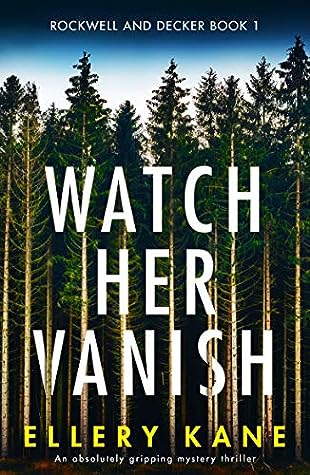 Watch her Vanish is a cant miss mystery in Ellery A. Kane new series Rockwell and Decker.

The author creates a small town that reader will be able to connect with as well the the troubles Criminal Psychologist Olivia Rockwell comes across she she is desperately trying to find her sister.

While Watch Her Vanish is a "Who Don it" Instead of using a clue like format they author uses the different characters who work alone until they are unable to more forward.

Readers might figure out quickly the connections and why the person is murdering the women. Yet its the story and not the easily figured out murder that will keep readers connected.

Rocker and Decker series is the start of a new mystery series that readers can not miss out on.

Thank you to Netgalley and the publisher for the advance copy of Elery A Kane Watch her Vanish.

Fear hits her like a wave crashing against the sheer cliffs nearby. She sees the woman’s feet first, then the legs bent like broken driftwood. Then, the blouse strewn open; the marks on her beautiful neck. Her knees buckle as a hand grabs her elbow to break her fall.Forced home to Fog Harbor, California, to look after her little sister, Criminal Psychologist Olivia Rockwell is struggling to adjust to life in a town so small she can hardly breathe. Until, at church one morning, the sound of a scream leads her to the body of a missing local teacher in the shallows nearby. All the evidence points to Olivia’s most threatening patient, Drake, who is safely locked up behind bars…Convinced of Drake’s innocence—and desperate to believe in the system that’s keeping her own murderer father behind bars—Olivia gets to work on her own suspect list. All her life she’s run towards trouble, but this time she’s treading on the toes of brooding and handsome Detective Will Decker.Then a second woman’s body is discovered, strangled while out on an evening jog. The strip of blue material used to choke her implicates Drake once again, forcing Olivia and Will to admit they are out of their depth and must work together to crack the case.The deeper they dig, the deadlier the trail becomes. It’s clear more innocent women will die if they don’t get one step ahead. But then a note written on a scrap of paper found in the last victim’s car leads them to a terrifying realization: the killer has his sights on Olivia’s little sister as the next victim

Forensic psychologist by day, novelist by night, Ellery Kane has been writing--professionally and creatively--for as long as she can remember. Just like many of her main characters, Ellery loves to ask why, which is the reason she became a psychologist in the first place. Real life really is stranger than fiction, and Ellery's writing is often inspired by her day job. Evaluating violent criminals and treating trauma victims, she has gained a unique perspective on the past and its indelible influence on the individual. And she's heard her fair share of real life thrillers. An avid short story writer as a teenager, Ellery recently began writing for enjoyment again, and she hasn't stopped since.Ellery lives in the San Francisco Bay Area of California, a picturesque setting that provides the backdrop for many of her novels. If you don't find Ellery interviewing murderers behind prison walls or pecking away at her latest novel, she is probably at the gym landing a solid jab-cross to a punching bag; riding bicycles with her special someone; or enjoying a movie the old-fashioned way--at the theater with popcorn and Milk Duds.Ellery's debut novel, Legacy, has received several awards, including winning the Gold Medal in the Independent Publisher Book Awards, young adult, e-book category, and the Gold Medal in the Wishing Shelf Independent Book Awards, teenage category. Ellery was previously selected as one of ten semifinalists in the MasterClass James Patterson Co-Author Competition, and she recently signed a three book deal with Bookouture for her new Rockwell and Decker romantic suspense series. The first book is scheduled for release in December 2020.