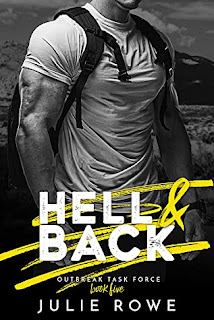 I will admit I am a fan of Julie Rowe and her ability to mix medical, romance, mystery and suspense. Most of her books there is a pretty good balance and other times the romance will take over the story but in end will never disappoint.

Henry Lee is a characters readers have been waiting to read.  He is a bit of a mystery that readers have come to adore in the series and hope he is finally able to find peace and love in his life. Ruby is a character who readers will be able to connect with at times and other will have them scratching their heads.

The author medical background gives this story a very honest and real feeling. The story can be read as a stand alone or part of the series.  Either way readers will love this story !!

Thank you to Netgalley and the publisher the the copy of Julie Rowe Hell and Back.

Racing to lock down the CDC's deadly virus samples from terrorists, ex-Special Forces medic Henry Lee partners with Ruby Toth on the Outbreak Task Force. But the terrorists always seem one step ahead. As they work side by side, Henry's taken with how Ruby accepts and respects him, instead of pitying him for all he lost overseas, including his leg. Ruby's hiding something, though, and Henry fears she's been leaking sensitive information.Terrorists have kidnapped her brother, and now microbiologist Ruby Toth faces a horrible choice. If she doesn't give them a vial of Small Pox as ransom, her brother will die. She knows her prickly—yet very hot—boss, Henry, could provide the help she needs. But she joined the CDC to root out insiders plotting to unleash a bio-engineered pandemic, and she can't trust anyone. Not even Henry

ebook, 400 pages
Published September 21st 2020 by Entangled Pubihsing, LLC (Amara)
About The Author:
Julie Rowe’s first career as a medical lab technologist in Canada took her to the North West Territories and northern Alberta, where she still resides. She loves to include medical details in her romance novels, but admits she’ll never be able to write about all her medical experiences because, “No one would believe them!” A double Golden Heart finalist 2006, Julie’s writing has appeared in several magazines such as Today’s Parent, Reader’s Digest (Canada), and Canadian Living. She currently facilitates communication workshops for her local city college. Julie enjoys hearing from her readers. You can reach her at www.julieroweauthor.com or on Twitter @julieroweauthor .
Posted by H. Wimmer at 12:00 AM