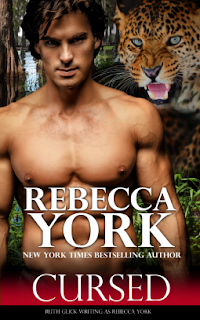 The story starts off with just the right amount of mystery to pull readers in but soon falls apart with the lack character development needed to keep readers intrigued.  This story is number 21 and with that it should pull readers into a world wanting them to start back at book 1 in the series and read all the way thought.  Instead it stops and starts so many times it didn't take much to flip though the pages to figure out the not so mysterious mystery.

Thank you to Netgalley for a copy of Rebecca York Cursed.

The moment Andre Gascon read Morgan Kirkland’s bio on the Decorah Security Web site, he knew she was the right person to investigate the eerie murders plaguing his estate deep in the Louisiana bayou. His e-mails drew her to him. But when she arrived at Belle Vista, she learned he was a man with dark secrets. He lived like a captive on his own land, disappeared into the swamp at twilight, drank a strange homemade tea–and refused to trust her. And why did a voodoo priestess show up every night with her drum? Morgan knew destiny had drawn her and Andre together. But could she break through the barriers he erected around his heart–before evil forces doomed them both?

Ruth Glick (born 1942) is a best-selling author of healthy cookbooks and has also written dozens of romantic suspense romance novels under the pen name Rebecca York.Ruth earned a B.A. in American Thought and Civilization from George Washington University and an M.A. in American Studies from the University of Maryland. Although she always wanted to become a writer, Glick was convinced that her lack of spelling skills meant that her goal was unattainable. As a stay-at-home mother, she took a community college course to help her choose a career. The course made it very clear that writing was her primary interest. Glick began writing articles for newspapers and magazines, but after several years decided to try writing fiction. Her first book, a kids' science fiction book, was finally purchased by Scholastic Inc..Since then, Glick has become a highly successful author of over 50 romantic suspense and paranormal novels. Many of her novels are published under the Harlequin Intrigue line, and in June 2003, she became one of the first authors published under Berkley's new Sensation imprint. Before 1997, she often collaborated with Eileen Buckholtz and Kathryn Jenson.