Book Review: All Scot and Bothered (Devil You Know #2) by Kerrigan Byrne 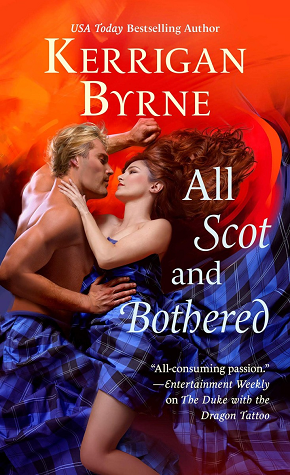 Title: All Scot and Bothered (Devil You Know #2)

Review:
This is book 2 in a series of which I am familiar with as I also reviewed Book 1 in August 2019 (How To Love A Duke In Ten Days - 4 stars). The trio of former schoolgirls are off on another mystery/murder/romance. This time the action takes place in London and briefly in Scotland. It all begins at a dinner party given  by one of the three friends who is married to a Duke. Also in attendance, the older step brother of the Duke (Cassius Gerard Ramsay, Lord Chief Justice of the High Court). Things heat up between Cecilia and Ramsay from the beginning. But unfortunately their next, unexpected meeting, is a different matter altogether. Ramsay is doing a raid on a gambling house that Cecelia is looking over as she just received it in her Aunt's will. From that point the intrigue just grows as the two, apparent enemies, discover a mutual attraction to each other. To find out if justice prevails you will have to read this offering.

I have given this book a 4 star rating and recommend it to any reader who enjoys historical romances.
I received a complimentary copy of this book. Opinions expressed in this review are completely my own.
Thank you Frank for your review.

Synopsis:
He is first and foremost—at everything. A man who's made his own way in the world through ruthless cunning and sheer force of will. A strong and imposing Scot who can turn on the charm but does not suffer fools. His title: Lord Chief Justice of the High Court. His name: Cassius Gerard Ramsay. His mission: To investigate the goings-on at London's most notorious gaming hell, owned and operated by one of the most intriguing and desirable women he's ever met.IN THIS GAME OF LOVE, THE RULES DO NOT APPLYCecelia Teague was an orphan facing a rather dire future—until a secret benefactor from her mother's scandalous past swept into her life. Sent to prestigious boarding school and later to university, Cecelia believed high society was at her fingertips...Then, from out of nowhere, she became the inheritor of a gambling establishment. Now Cecelia must live two lives: one as a proper lady who finds herself undeniably drawn to Lord Ramsay and the other as a savvy gaming hell owner trying to save her business from the very same man. He has no idea she is both women...and Cecelia would like to keep it that way. But what happens when consuming passion and escalating danger threaten to reveal the truth?

About The Author:
If you're anything like me, the best night is one spent with a brawny highlander, a mysterious werewolf, a conflicted vampire, or a hot-headed Irishman. My stories span the spectrum of romantic fiction from historical, to paranormal, to romantic suspense. But I can always promise my readers one thing: memorable and sexy Celtic heroes who are guaranteed to heat your blood before they steal your heart. Lose yourself in the enchanted Celtic Isles, you never know who, or what, will find you..
Posted by H. Wimmer at 12:00 AM