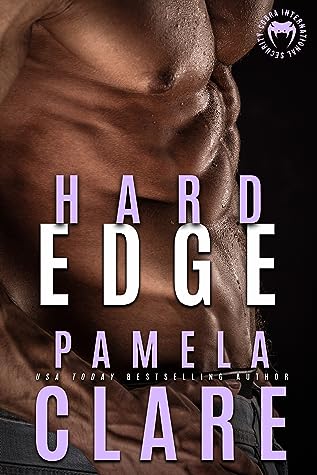 Review:
Hard Edge starts off with everything reader love about Romantic Suspense novels but soon the two leads end up never leaving their hotel room, falling in lust. Slowing the story down to a crawl.  The last half of or 20%left of the book is when the action picks up it pulls readers in keeping them locked and loaded.  The ending is predictable. The author tries hard to get readers to connect to Gabriela families and the loss she has experienced but it falls just short of what readers might have wanted.
The story is a quick fast hot read for those looking for something yummy next to the pool side but make sure your kids are not looking over your shoulders.

Thank you to netgalley and the publisher for a copy of Pamela Clare Hard Edge.

Synopsis:
Gabriela Marquez came to her parents’ homeland of Venezuela to help its people. Working undercover for the CIA as Sister María, a Franciscan nun, she spends long days at the mission, giving food to the poor, helping the sick—and keeping a close watch on local drug trafficking. When a violent raid makes her a hostage together with two American journalists, she finds herself the prisoner of the very cartel she’s been spying on. Fortunately for the journalists—but not so luckily for her captors—Sister María is not what she seems to be. Hiding behind her nun’s habit, Gabriela puts her training to use to ensure the hostages’ survival.Dylan Cruz spent the better part of a decade with Seal Team Six, ridding the world of scum. Now an operative with Cobra International Security, he’s sent to Venezuela with a small team to gather intel for a hostage rescue. Against all expectations, he gets valuable information from one of the hostages—a beautiful young nun. Sister María of the Gorgeous Brown Eyes puts R-rated thoughts in his mind, thoughts he has no business thinking. Then again, he always figured he’d end up in hell.When the rescue fails, Dylan finds himself trapped in hostile territory with lovely Sister María. Together, they go underground to reach the Colombian border, but Sister María is full of secrets—and enticing surprises. Beneath that shapeless, gray habit is a woman whose abilities—and passions—are a match for Dylan’s. As the desire between them ignites, what should have been a straightforward mission of evade-and-escape turns into a fight for survival against a murderous cartel boss who wants them both dead.

About The Author:
USA Today best-selling author Pamela Clare began her writing career as a columnist and investigative reporter and eventually became the first woman editor-in-chief of two different newspapers. Along the way, she and her team won numerous state and national honors, including the First Amendment Award and the National Journalism Award for Public Service. In 2011, she was honored by the Colorado Pro Chapter of the Society of Professional Journalists with their Keeper of the Flame Lifetime Achievement Award for her work. A single mother with two grown sons and two cats, she writes historical romance and contemporary romantic suspense within view of Colorado’s beautiful Rocky Mountains. She is a two-time RITA finalist (Surrender, Defiant) and a three-time Daphne du Maurier finalist (I-Team series). She loves history, having studied archaeology in college, and has traveled extensively, living for almost three years in Denmark, which feels like home to her. She attributes her love of historical romance with the years she spent visiting ruins and castles in Europe.
Posted by H. Wimmer at 12:00 AM