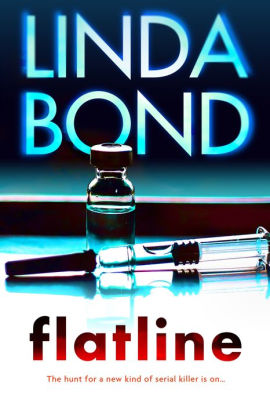 Review:
This is the first I have read by Linda Bond and book 3 in a series or can be read as a stand a lone called The Investigators.
The story follows a doctor in the ER who is right in the middle of a virus that no one is able to control and a new reporter who is about to make her epic news.
The story is spot on with how people are feeling right now as it answers some questions about a outbreak while keeping the story moving without being bombard with medical jargon.
The story is face pace and readers of the series will love to see what is going with their characters and add a new set of characters to fall in love with.
This is a must read summer read for those who need a break from family but still want a little action in the outbreak world.
Thank you to Netgalley and the publisher for the advance copy of Linda Bond Flatline.

Synopsis:
People are dying in Dr. Joshua Salvador’s ER. His medical assistant, only weeks from delivering her baby, hangs on to life by a thread. The symptoms seem horrifyingly familiar, and he begins to suspect the deaths are targeted at him. But, before he can figure things out, top TV investigator Rachel Wright is standing in the middle of his ER, convinced an outbreak, an epidemic, or even a botched flu vaccine could be the cause, and she’s going to tell the world.

About The Author:
Author Linda Bond was born in San Francisco, California but spent most of her life in the south, attending middle and high school in Greenville, South Carolina and college at the University of Georgia in Athens, Georgia.She’s worked as a television news reporter and anchor in Fort Myers, Orlando and Tampa Florida. For the past twenty years, she’s shared important information with viewers on the latest medical breakthroughs and has written emotional, human-interest stories on those who have the courage and spirit to fight for their lives.She writes every day, under deadline, but has always loved losing herself in a good fiction story. Her love for writing fiction actually started in high school, but a thriving, busy professional life, along with five kids kept her busy for many years.Entangled Publishing released two romantic adventures Alive at 5 and Cuba Undercover. Think James Bond meets Romancing the Stone. Cuba Undercover is based on her own true life love story.She has received numerous writing awards for Alive at 5 and Cuba Undercover.Her latest, a medical thriller, LIVEshot will be released in May 2020.She has also won 12 Emmy awards, numerous Society of Professional Journalist awards, Associated Press awards, as well as a Florida Bar award and an Edward R. Murrow award.This former baton-twirling beauty queen from the deep south, now lives in Tampa Florida with her husband, adopted son from Cuba, two daughters and two stubborn bulldogs named Sanford and Athens.