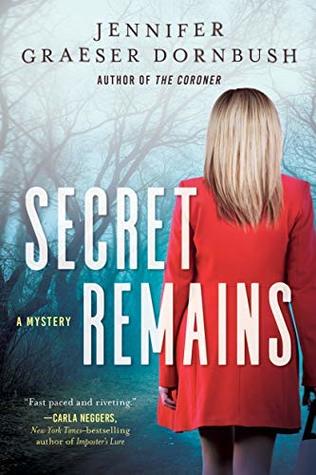 Review:
I am not sure what I was hoping for maybe a mix of the TV show Bones and something new? The story is predicable as well as the romance. Readers will pick up on the killer right away and feel as if they are being drag alone a mystery but the characters are still working on.
The author has the ability to bring readers into her locations as if the town its self is a characters in the book.
The romance works with the story but at times isn't convincing.
Thank you to Netgalley and the publishers for the advance copy of Jennifer Graeser Dornbush Secret Remains

Synopsis:
It's been 12 years since Sandi Parkman went missing after being dropped off at home by her schoolmate, Nick Larson, now the Sheriff of Freeport, Michigan. When a construction crew unearths Sandi's bones--along with Nick's letterman jacket and one of his hairs--Nick becomes suspect number one in the murder.Dr. Emily Hartford, the daughter of Freeport's medical examiner, is called in to investigate, but the case is about to get personal. Nick was Emily's high school love, and now she has to either clear his name--or contend that he's the killer. As she delves into the case, a host of other suspects emerge: a coterie of Nick's jock friends from high school; Sandi's sister, Tiffany, now a dancer at a local strip club; and James VanDerMuellen, a trust funder who's recently returned to Freeport.As the autumn skies darken over Freeport and the holiday season looms, Emily must sift through more than Sandi's brittle bones to solve the case. Can she exonerate Nick--and rekindle their long-smoldering romance? The race is on to find the truth.

About The Author:
The television or movie screen is the closest most people will ever come to witnessing the forensic world. But Jennifer Dornbush actually lived it. As a daughter of a medical examiner, whose office was in her home, she investigated her first fatality, an airplane crash, when she was 8 years old. Since that first case she has had decades of on-sight experience in death investigation and 360 hours of forensic training through the Forensic Science Academy.Today, Jennifer is a screenwriter, author, speaker and forensic science specialist. Her mystery novel, The Coroner, was released in 2018, with the sequel, Secret Remains, coming in early 2020.Her feature film, God Bless the Broken Road had a wide release in theaters in 2018. She also penned the novel adaptation for Howard Books/Simon & Schuster (released 2017).
Posted by H. Wimmer at 12:00 AM