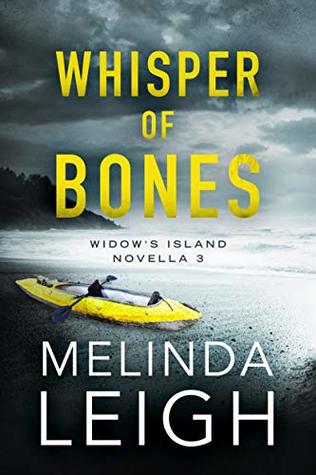 Review:
Whisper of the Bones is a short novella that Melinda Leigh and Kendra Elliot have written together using several different characters different points of views.
After finishing the book I had to go back and reread the first book. I was a little lost. The author crammed a lot of things into a short amount of pages an while sometimes it works this time I have to admit something was missing. The connection between the two lead characters in this book didn't seem connect. Male lead even brings up the amount of dead bodies that seem to be found on this small island since he came home.  I get the idea the island is purging its self of the evil but something just doesn't quite flow as well as before.
Thank you to the Author Melinda Leigh and Netgalley for the advance copy of Whisper of Bones

Synopsis:
When a body washes up on the state park beach, Deputy Tessa Black’s experience as a former Seattle detective tells her that the death was not an accident. All evidence points to another murder on the remote island.The victim is a local contractor with a shockingly long list of enemies. The more locals Tessa interviews, the more people she suspects—from the bitter ex-wife and estranged current wife to disgruntled former clients and employees. They all have different reasons to want him dead.As Tessa’s investigation heats up, arson and a vicious assault convince her the killer is desperate to hide his crime—and that she’d better solve the case before he claims another victim.

About The Author:
Melinda Leigh is a fully recovered banker who learned that writing books is way more fun than analyzing financial statements. Melinda’s debut novel, SHE CAN RUN, was nominated for Best First Novel by the International Thriller Writers. Since then, she has garnered numerous writing accolades, including two RITA® Award nominations and an induction into the NJ Romance Writers Hall of Fame. Her novels have sold more than 7.5 million copies across the world. Melinda loves martial arts, rescue dogs, and sea turtles
Posted by H. Wimmer at 12:00 AM