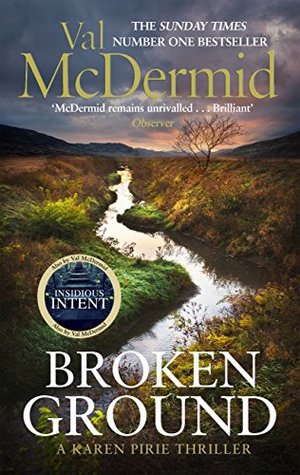 
For all fans on British Police mysteries (or in this case Police Scotland) this book needs to be at the top of your to be read list. It has diamonds stolen, from a murdered Nazis, in Beligum by an American spy operative at the end of the war. These are taken to Scotland and subsequently hidden in one of two new Indian motorcycles when he realizes he can not smuggle them aboard ship on his return to the US. These two motorcycles are then secretly buried, with the intent to later recover, by two local spy instructors following a burn or bury order to dispose of no longer needed equipment. When a subsequent recovery operation by a granddaughter, 70+ years later, uncovers a well preserved more recent body a murder investigation is launched by the cold case team. This book must be read to be appreciated.


I have given this book a 5 star rating.


I received an ARC from Netgalley for my unbiased review. Thank you Frank

peat bog - a pair of valuable vintage motorbikes buried by her grandfather at the end of World War II. But when Alice finally organises their recovery, she finds an unwelcome surprise -a body with a pair of bullet holes . . . and Nike trainers. DCI Karen Pirie of Police Scotland's Historic Cases Unit is called in to unravel a case where nothing is quite as it seems.
Meanwhile an overheard conversation in a cafe draws Karen to the heart of a murder she thought she'd already prevented.
As Karen gets closer to the several truths, it becomes clear that not everyone shares her desire for justice. Or even the idea of what justice is.

Val McDermid is a No. 1 bestseller whose novels have been translated into more than thirty languages, and have sold over eleven million copies. She has won many awards internationally, including the CWA Gold Dagger for best crime novel of the year and the LA Times Book of the Year Award. She was inducted into the ITV3 Crime Thriller Awards Hall of Fame in 2009 and was the recipient of the CWA Cartier Diamond Dagger for 2010. In 2011 she received the Lambda Literary Foundation Pioneer Award. She writes full time and divides her time between Cheshire and Edinburgh
Posted by H. Wimmer at 12:00 AM