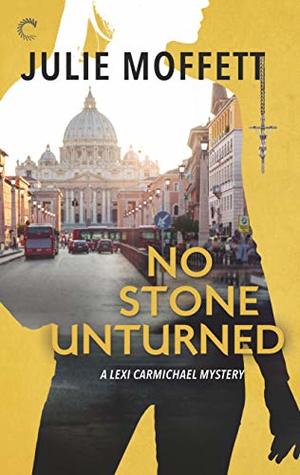 Review:
I will admit I have read all of the Lexi Carmichael series.  The author is able to allow characters to grow and develop while keep the stories moving from one crazy moment to the next.
This book didn't have me nearly as excited as the others. Slash and Lexi are engaged and he wants to protect her from his past.  The story is told from different points of view and while that is interesting and well done the story seemed chopped up and glued together.  We finally learn a little more able Slash past and who is father is but not his mother.  Which is the cliff hanger in the story.
No Stone Unturned might leave readers wondering why the hush hush over Slash backstory.
The story doesn't flow nearly as well as other.  The author spend a lot of time describing the scenery, locations in Italy that takes over the story. The story loses some of the excitement the other stories have the villain is interesting because of the connection to the church but he lack anything that had readers wanting to see his end.
While it is a nice addition to the Lexi Carmichael series it felt as if it was a patchwork story written at different times or scenes written than throw into a location in hope hopes to save the story but instead falls flat.
Thank you to Nextgalley and the Publisher Carina Press for the Advance Copy of Julie Moffett No Stone Unturned

Synopsis:
Geek girl Lexi Carmichael thought getting engaged would mean calmer days ahead. But when Slash's past brings up more questions than answers, she's not going to let anything--or anyone--drive them apart.Getting engaged is supposed to be a fun, exciting time in a girl's life. But things are never that easy for Slash and me. Instead, someone is threatening to expose Slash's past--a past so secret, even I know very little about it.Before I can get used the weight of Nonna's antique ring on my finger, he's on his way to Rome...and we're farther apart than we've ever been. Still, I have no intention of sitting at home and letting him take on the Vatican by himself.With a little expert-level hacking, I learn Slash is keeping secrets from me. Big ones. Dangerous ones. In fact, the more I dig into Slash's past, the more I discover things about him I never knew--things that eventually pit us against each other.From Rome to the Amalfi coast to the highest levels of the Vatican, we both race to discover the truth. No matter what I find, we're officially a team now, so I won't let him face this alone. Even if I don't know if our relationship can survive it. 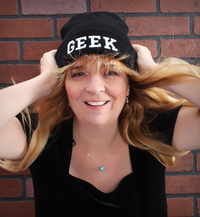 Julie Moffett is a bestselling author and writes in the genres of mystery, young adult, historical romance and paranormal romance. She has won numerous awards, including the 2015 Award of Excellence, 2014 Mystery & Mayhem Award for Best YA/New Adult Mystery, the prestigious 2014 HOLT Award for Best Novel with Romantic Elements, a HOLT Merit Award for Best Novel by a Virginia Author, the 2016 Award of Excellence, a PRISM Award for Best Romantic Time-Travel AND Best of the Best Paranormal Books of 2002, and the 2011 EPIC Award for Best Action/Adventure Novel. She has also garnered additional nominations for the Bookseller's Best Award, the Daphne du Maurier Award and the Gayle Wilson Award of Excellence. Her book A Double-Edged Blade was an Amazon #1 Best-Selling Novel.Julie is a military brat (Air Force) and has traveled extensively. Her more exciting exploits include attending high school in Okinawa, Japan; backpacking around Europe and Scandinavia for several months; a year-long college graduate study in Warsaw, Poland; and a wonderful trip to Scotland and Ireland where she fell in love with castles, kilts and brogues.Julie has a B.A. in Political Science and Russian Language from Colorado College, a M.A. in International Affairs from The George Washington University in Washington, D.C. and an M.Ed from Liberty University. She has worked as a proposal writer, journalist, teacher, librarian and researcher. Julie speaks Russian and Polish and has two sons.
Posted by H. Wimmer at 12:00 AM