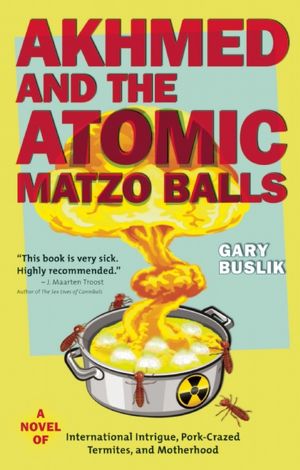 Title:    Akhmed and the Atomic Matzo Balls: A Novel of International Intrigue, Pork-Crazed Termites, and Motherhood

Review: It is extremely hard to write a funny book.  Comedy relies a lot on timing, inflection, and visual expression for full impact.  That is why I am always delighted when an author manages to get it right, especially after so many get it wrong. With this book Buslik has joined the ranks of Christopher Moore and Dave Barry.


The author begins his story with a wide cast of characters, from the hated dictators of our time, a woefully overblown liberal college professor and his estranged far right daughter, and even rampant porcine loving termites.  Slowly we begin visiting each character in-turn to advance the plot ever so slightly.  But the story builds in ever tightening spirals and the characters begin overlapping, creating a fast paced and fun climax.


My favorite character was Les Fenwich, a prime example of what can be wrong with modern academia. A professor of English who believes the more confusing he can make the language through the use of large words the more intelligent he is.  Who is contrarian as a matter of course rather than conscious.  I am grateful I have never met anyone so completely like Les in real life, but I see shadows of him everywhere.


Buslik has created a farce of the highest order that will forever change your view of the matzo ball and its lethal potential.  A comedy that manages to be funny, and it manages to see the humorous side of violent death to boot.  Plus, who knew the president of Iran was such a good dancer?

Synopsis:   Iranian president Akhmed teams up with the leaders of Venezuela and Cuba and their American intelligence agents to smuggle radioactive matzo balls into Miami Beach. But intelligence being as slippery a concept to these nincompoops as chicken fat on linoleum, when each member of the gang decides to ladle out his own personal nuke soup, holy terror Akhmed is left steaming. Will his plan to destroy America float like a fly or sink like a lead dumpling?
Star-crossed lovers, conniving academics, and blustery social climbers collide with ravenous termites, international do-badders, and multi-level marketing in a plot as fast-paced and hilarious as a runaway mountain bus. Radioactivity has never been so much fun. 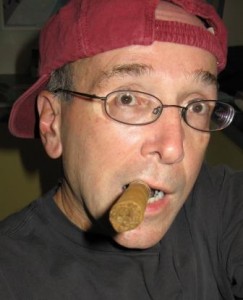 Author Biography: Gary Buslik is an American novelist, short story writer, travel writer, and essayist. His work has appeared in many literary and commercial magazines and anthologies. His travel-essay collection A Rotten Person Travels the Caribbean (Travelers' Tales, 2008) won the 2009 Benjamin Franklin Book Award. He was born in Chicago, Illinois, and earned his Ph.D. in English literature from the University of Illinois at Chicago.

Other Reviews:  Simply Jews, Amazon Reviews
Posted by Unknown at 3:00 AM