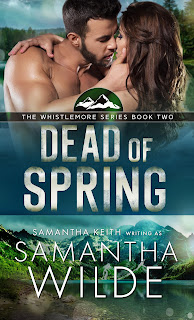 The story starts off face pace bring readers up to speed on the history of Quinn and Josie and the once spark they had for each other.

As the story moves along it starts to slow down having readers wonder what happened to the pace.  The villain is easy to figure out. The story faulters and drags at times.  The author quickly wraps up the mystery quickly focusing on the couple instead of the story.  This might please some readers and other will be disappointed.

Thank you to Netgalley for advance copy of Dead Brings by Samantha Wilde.

When Quin Levington shows up at her door, Josie Ryan is fuming. It’s the one-year anniversary of Liam’s death: her boyfriend and Quin’s best friend. And it’s been eight months since Quin fell off the face of the earth—when she needed him most. Despite the anger simmering inside her, part of her is relieved to see his warm hazel eyes. But he comes bearing news. Quin believes Liam’s death wasn’t an accident, and when Josie is attacked, it becomes shockingly clear that a killer is among them.Quin has always been in love with Josie, but he’d never cross the line with his best friend’s girl. He knows someone tampered with the harness that should have prevented his friend’s fall, and since Liam’s death someone has been trying to chase him away. After being framed for starting a bar fire, Quin was forced into hiding—and away from Josie.He and Josie quickly realize that the killer won’t let up until Josie is dead. Quin will do everything in his power to protect her. He owes it to his friend . . . and himself. But the closer he gets to Josie, the harder it is to keep his hands off her. Her haunting eyes are full of anguish and grief, but when her lips touch his, he knows he can never let her go. Not again. Together, they must bring the killer to justice and avenge Liam’s death, once and for all.

Samantha Wilde resides in Saskatchewan, Canada, with her husband and two small daughters. Teddy, the family multi-poo, completes her family. Samantha writes steamy, fast-paced, romantic suspense novels in the rare moments she has uninterrupted—even interrupted, she manages to apply words to paper. Aside from her love of writing, her other interests include cooking vegan meals, fantasizing about working out, and eating far too much chocolate. Abducted, the first book in the Dangerous Distractions series, came in first place in the romantic suspense category for the Heartland Romance Authors’ Show Me the Spark Contest.