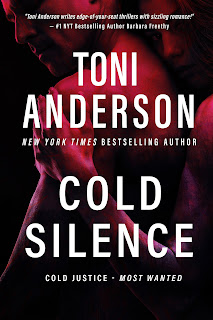 Cold Silence brings characters from Toni Anderson other series which will make fans smile.  The story starts off quickly with a killer who wants nothing more than spread his enjoyment of torture to the dark net to the highest bidder.

The author created a dark world of secrets that could destroy what little faith the Yael has in the world she has created around her.  Alex Parker is the same guy from the first book in the series but has grown as the series has moved from book to book.

This book is the perfect mix of suspense, psychological thriller as the killer toys with the minds of everyone on the team that is hunting the crazy man down. Murder, heartache, love, romance, swearing, and sexy time can be found in this perfect story that Toni Anderson has crafted for her readers and new readers to enjoy.

Thank you, Toni Anderson, for advance copy of Cold Silence and sorry it wasn't posted sooner.

FBI Hostage Rescue Team member Shane Livingstone is frustrated when an injury sidelines him during an operation to catch a sadistic killer. A killer who auctions off vicious ways to torture his victims and screens the events for money on the dark web. When a teammate dies during the op, a devastated Shane vows to track down the monster responsible—but to do so he’ll need access to specialized skills he doesn’t possess.A bloody game of cat and mouse…As a white-hat hacker at Alex Parker’s security firm, Yael Brooks knows how to track predators through the darkest recesses of cyberspace. She can’t say no to Shane’s request…even though she fears her own secrets may put her at risk.With a serial killer who makes it personal…Shane and Yael must work together as a team if they hope to stop this psychopath. As they begin to grow closer, Shane demands Yael’s complete trust, but trust is the one thing Yael is reluctant to give. As the chase intensifies and more people die, it becomes obvious that the killer knows exactly who Yael is and plans to make both her and Shane pay the ultimate price for getting in his way.

Toni Anderson writes gritty, sexy, FBI Romantic Thrillers, and is a New York Times and a USA Today bestselling author. Her books have won the Daphne du Maurier Award for excellence in Mystery/Suspense, the Readers' Choice, Aspen Gold, Book Buyers' Best, Golden Quill, and National Excellence in Romance Fiction awards. She’s been a finalist in both The Vivian Contest and the RITA Award from the Romance Writers of America. Her books have been downloaded more than two and a half million times.Best known for her “Cold” books perhaps it’s not surprising to discover Toni lives in one of the most extreme climates on earth--Manitoba, Canada. Formerly a Marine Biologist, she still misses the ocean, but is lucky enough to travel for research purposes. In January 2016, she visited FBI Headquarters in Washington DC, including a tour of the Strategic Information and Operations Center.