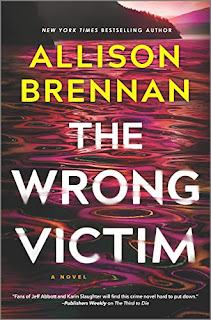 When you say a book starts off with a Bang The Wrong Victim is that book.  The readers are given seeing life from the people on the boat before a bomb kills everyone on board.

The story brings to life what real police work is like vs TV where everything is solved in an hour.  The times it takes to process the information and the amount of people the police and FBI have to talk to will seem endless.  Each person has their own story and reason for being in the story.

You can't miss a single section of the story because everything is so intertwined you might reread if you skip any section.  The story moves at a balanced pace giving readers the right about of background for each major character.  Allison Brennan is a talented author who gives readers a well-developed story that no one will be able to put down.

A bomb explodes on a sunset charter cruise out of Friday Harbor at the height of tourist season and kills everyone on board. Now this fishing and boating community is in shock and asking who would commit such a heinous crime—the largest act of mass murder in the history of the San Juan Islands.Forensic profilers know there are two types of domestic terrorists: those who use violence to instill fear for political purposes but stop at murder because it detracts from the cause, and those who crave attention and are willing to maim and murder for their own agenda.Accused of putting profits before people after leaking fuel that caused a massive fish kill, the West End Charter company may itself have been the target. But as special agent Matt Costa, detective Kara Quinn and the rest of the FBI team begin their investigation, they discover that plenty of people might have wanted someone dead on that yacht. Now they must track down who is responsible and stop them before they strike again.

New York Times and USA Today bestselling author Allison Brennan believes that life is too short to be bored, so she had five children and writes three books a year.40 books and numerous short stories later, Allison relocated in 2019 from Northern California to Arizona with her husband and two youngest children.She currently writes the Lucy Kincaid series and the Quinn & Costa series. Next up is THE WRONG VICTIM on 4/26/22 where Detective Kara Quinn & FBI Agent Matt Costa travel to the San Juan Islands to investigate a charter boat explosion that left nine dead. Kirkus Reviews says Kara Quinn is "A strong and damaged protagonist as compelling as Lisbeth Salander."RT Book Reviews calls Allison “a master of suspense” and her books “haunting,” “mesmerizing,” “pulse-pounding” and “emotionally complex.” She's been nominated for many awards, and is a three time winner of the Reviewer's Choice award winner for RT Book Reviews as well as the Daphne du Maurier award. Most recently, she was nominated for Best Paperback Original by International Thriller Writers.You can reach Allison through Goodreads or through her website.