Book Review: Nonna Maria and the case of The Missing Bride by Lorenzo Carcaterra 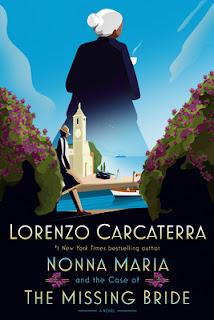 Title: Nonna Maria and the case of The Missing Bride

A warm mystery set in a small Italian village on an island just off the mainland. Although the main focus is the bride to be, who wants to escape marriage, the reader soon finds themselves involved in an old murder, a new murder, fraud, and drug smuggling. You will soon find that you have become enthralled in the life of a widowed grandmother in a small village. She knows everyone from the mafia honcho to the local police chief. She keeps all the secrets while at the same time securing justice for the injured parties. A very readable book that will keep your attention.

This book presents a different viewpoint on life and what is important. I have rated this book 4 stars.
Thank you, Frank, for you review!
I received an ARC from Netgalley for my unbiased review.

Nonna Maria has lived in Ischia, an island in the Gulf of Naples, her entire life. Recognizable by the widow's black she's worn every day for decades, she always has pasta on the stove and espresso in the pot for the neighbors who stop by to ask her advice on life and love. Everyone knows her, and she knows everyone's business. So if something goes wrong, islanders look to her, and not the local carabinieri, to find the solution.When a recently engaged woman confesses that she's afraid her fiance might not be who he seems, Nonna Maria helps her disappear while she investigates the true nature of her betrothed, a stranger to Ischia with a murky past. The stranger has also raised the suspicions of Captain Murino of the carabinieri, but he's occupied investigating the death of a tour boat captain who drowned in the wee hours of the morning. Captain Murino believes it's an accident, but Nonna Maria knew the man was a born sailor, and too good a swimmer to drown, no matter how much wine he might have drunk. While Captain Murino has his hands full, she pours herself a glass of white wine and gets to work, even though getting involved will expose her to the dangers lurking just beneath the surface of her idyllic home.

Number-one New York Times bestselling author Lorenzo Carcaterra's highly successful career spans more than 25 years of writing for the diverse fields of fiction, non-fiction, television, and film.Born and raised in New York's Hell's Kitchen neighborhood, Carcaterra landed his first job in the newspaper business as a copy boy for The New York Daily News in 1976. He worked his way up to entertainment reporter before leaving the paper in 1982, heading for the green pastures of then-Time Inc. and TV-Cable Week, as senior writer. Nine months later, the magazine folded, leaving him unemployed. A four-month stint at People magazine was followed by an odyssey of writing for a string of start-up publications—Picture Week, Entertainment Tonight Magazine, Special Reports Magazine—and freelancing for dozens of others—The New York Times Sunday Magazine, Newsday Sunday Magazine, Family Circle, Ladies Home Journal, and Twilight Zone Magazine among them.In 1988, Carcaterra turned to television as a Creative Consultant for the syndicated weekly series Cop Talk: Behind the Shield, produced by Grosso-Jacobson Productions. That led to a job as Managing Editor for the CBS weekly series Top Cops, also with Grosso-Jacobson Productions. Running for four seasons, from 1990 to 1994, the show is still in syndication today worldwide. In addition, he worked on a dozen other pilots, one of which––Secret Service (NBC)––made it to air. It was while at Grosso-Jacobson Productions that Carcaterra wrote and published his first two books­, A Safe Place and Sleepers.First published in hardcover in 1993, A Safe Place: The True Story of a Father, a Son, a Murder, attracted widespread critical acclaim, with Newsweek calling it, “unforgettable—a remarkable book.” Currently in its 14th printing, it has been sold to 11 foreign countries and has sold close to 220,000 copies.The 1995 publication of Sleepers, which was a #1 New York Times bestseller in both hardcover and paperback, catapulted Carcaterra to national attention. Sold to 35 foreign countries and now in its 38th printing in the United States, the book has sales exceeding 1.8 million copies. In 1996, Sleepers was made into a feature film starring Brad Pitt, Robert DeNiro, Dustin Hoffman, Kevin Bacon, Minnie Driver, and Jason Patric. Carcaterra served as co-producer on the project, which was directed by Academy Award winner Barry Levinson. To date, the movie has earned in excess of $500 million worldwide in combined box-office, video, DVD, and TV sales.Carcaterra made a smooth transition into writing fiction with his first novel, Apaches, a New York Times bestseller in both hardcover and paperback. Published in a 14 foreign countries, the book has sold more than 450,000 copies and been optioned by producer Jerry Bruckheimer.He followed that with Gangster, published in hardcover in 2001. The book has sold over 375,000 copies since its 2002 release as a Mass Market Paperback. The novel has been optioned by Joe Roth and been sold to 15 foreign countries.Carcaterra then wrote Street Boys, a World War II saga inspired by an incident which occurred in Naples, Italy, in 1943. Warner Bros. and Bel-Air Entertainment bought the rights to the story in March 2001 before it was written, and developed the project for director Barry Levinson. Carcaterra wrote the screenplay. The paperback was released in July, 2003 and has since sold 150,000 copies.Carcaterra's next novel Paradise City was published in hardcover by Ballantine in September 2004 with the paperback following a year later. To date, the novel has sold over 100,000 copies and was optioned by Fox Television to be developed as a weekly series.In 2007, Carcaterra published Chasers, a sequel to his bestseller Apaches. The paperback version was published in the spring of 2008 and movie rights to the story are once again controlled by Jerry Bruckheimer Productions.