Book Review: The Spinster and the Rake (Never a Wallflower #1) by Eva Devon 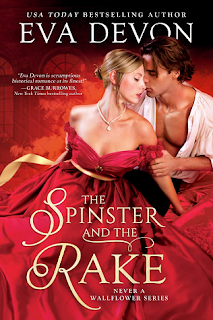 Title: The Spinster and the Rake (Never a Wallflower #1)

A delightful tale that revolves around a bluestocking young Miss and an apparent stoic and distant Duke. Their first meeting takes place in his private study where she has sought a quite moment from a house party. She mistakes him for a rude and haughty servant owing to his attitude and shabby clothing. During a battle of wills, over the occupancy of the room, a threatened kiss is exchanged and they are caught in the act by his Aunt. Will he do the right thing? Both have faults and so begins the age old battle to determine who will be victorious. But will lust overcome them both and lead to a mutually satisfying solution to the problem.

I found the story to be well thought out and written. I have rated it 4 stars and would purchase it for friends who enjoy historical romances.

The marriage game is afoot in this clever blend of My Fair Lady meets Pride and Prejudice with a twist!Edward Stanhope, the icy Duke of Thornfield, likes his life in a certain order. Give him a strong drink, a good book, and his dog for company, and he’s content. But when he goes to his library and finds a woman sitting in his chair, petting his dog, what starts as a request for her to leave quickly turns to a fiery battle of wits, leading to a steamy kiss that could ruin them both if they were caught.So of course, damn it all, that’s when Edward’s aunt walks in, and thereafter announces Miss Georgiana Bly is the future Duchess of Thornfield.Georgiana was content to be a spinster, spending her days reading and working to keep her family out of debt. But now her days are spent locked away with a growly duke, learning how to be the perfect duchess, and her nights spent fighting the undeniable attraction to a man who was never meant for her.As their wedding day approaches, the attraction between them burns hot and fierce, but is it enough to melt the duke’s chilly facade?

Eva Devon, was raised on literary fiction, but quite accidentally and thankfully, she was introduced to romance one Christmas by Johanna Lindsey's Mallory novella, The Present. A romance addict was born. She devoured every single Lindsey novel within a few months and moved on to contemporary and paranormal with gusto. Now, she loves to write her own roguish dukes, alpha males and the heroines who tame them.