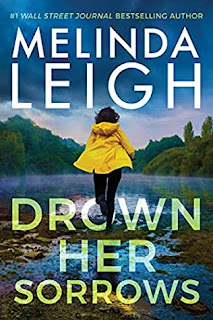 Melinda Leigh doesn't disappoint ever! Her stories are well written. The characters grow and change as time passes. Drown Her Sorrows has a rhythm and pace along with incredible characters that readers will be able to connect with. Feel compassion at the loss the characters have lots from the children to the adults.

Bree Taggert starts to open up as a characters and expressing her feeling that she has struggled with her whole life.  Bree is flawed in the most human way that readers will be able to connect with.

Drown Her Sorrows is part of a series the author bring readers up to date fast as well throughout the story.

The story has the perfect blend murder mystery, romance, suspense to keep readers hooked until the very last page.

This reader can't wait to get her hands on the net Bree Taggert book.

When Sheriff Bree Taggert discovers the body of a young woman floating near the bank of the Scarlet River, a note in her abandoned car suggests suicide. The autopsy reveals a different story. Holly Thorpe was dead long before she dropped off the bridge and hit the water.As Bree and her investigator Matt Flynn delve into the case, secrets in Holly’s personal life complicate their efforts to solve the murder. Holly left behind a volatile marriage, an equally divisive relationship with her sister, and an employer whose intimate involvement with Holly was no secret. Each one has a motive for murder.When Holly’s sister is terrorized by a stalker’s sick prank, and the prime suspect turns up dead, everything Bree was sure of is upended and her case goes off the rails. When the killer strikes close to home, Bree and Matt must race to solve the murders before one of their own becomes the next victim.

Melinda Leigh is a fully recovered banker who learned that writing books is way more fun than analyzing financial statements. Melinda’s debut novel, SHE CAN RUN, was nominated for Best First Novel by the International Thriller Writers. Since then, she has garnered numerous writing accolades, including two RITA® Award nominations and an induction into the NJ Romance Writers Hall of Fame. Her novels have sold more than 10 million copies across the world. Melinda loves martial arts, rescue dogs, and sea turtles.