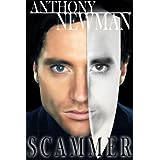 Title:  Scammer
Author:  Anthony Newman
Review: I really do not know what to think about this book.  Normally an author creates a character that people can identify with and relate to.  However, in this book I couldn't identify with any character and I found them to have no redeeming qualities. After the first few pages I found myself wondering if the author's intention was to create an extremely unlikeable character. Jeff, the lead character, not only created a Ponzi scheme but also took money from an Arab terrorist groups, "Right Wing Militia" groups, the mob, and other enemies of the United States.  He creates a lifestyle by stealing from the ruthless characters of the world and uses middle class investors to keep his company going.
Jeff had several unlikeable friends, one being Sal. Sal talks about women as if they are sexual objects and makes sure to use them as such.  He's crude when describing the way he would use the women, which once again made me question the author's intentions for creating a book with so many unlikable and unsavory characters.
Jeff is a huge dirt bag and I kept hoping the more I read I would find some things that would allow me to connect with the author's lead character.  Instead I only hoped Jeff would die at the end of the book in a very slow and painful way.  Everything Jeff did was for only himself and he really never thought of the effects his decision had on others and loved ones.
Throughout the book we meet Jeff's right hand man Mark, this character was a little bit of a surprise.  He was not only Jeff's voice of reality when things were going crazy but he would appear and disappear constantly.  The author threw everything in this book that he could think of and at one point I thought he might actually have someone throw in the kitchen sink.  The book had affairs,  Government conspiracies, dealings with the mob, killing someone he loved to save himself, torture, rape, murder, bombs and terrorists sleeper cells.  I was so happy to finish this book because I couldn't find any redeeming literary qualities.   I am trying really hard to be nice but the author wrote the most unlikeable characters I have ever read.
FYI: (A Ponzi scheme is an investment fraud that involves the payment of purported returns to existing investors from funds contributed by new investors. Ponzi scheme organizers often solicit new investors by promising to invest funds in opportunities claimed to generate high returns with little or no risk. In many Ponzi schemes, the fraudsters focus on attracting new money to make promised payments to earlier-stage investors and to use for personal expenses, instead of engaging in any legitimate investment activity. Taken from the U.S. Securities and Exchange Commission.  )

Thank you Heidi for this review.
Publisher: eBookIt.com (January 13, 2012)
ISBN: B006X7PJ8C
Copyright: 2012
Pages: Kindle Copy
Quick Review: 1 stars out of 5
Why I Read It:  Sent by the author for review.
Synopsis:  Jeff Mendelson's world is turned upside down when his Ponzi scheme is discovered by his investors and they seek revenge. He is in a race against time as he and his friend Mark venture off to secure the money he's been hiding in order to secure his future before he is finally caught. Along the way he runs into other shady people who know what he is hiding and want a piece of the action. All types of villains come out of the woodwork as Jeff battles to save himself from his own mistakes and greed. Scammer is a fast paced, suspenseful story, packed with twists and turns in every chapter.
Author Biography:
Anthony Newman has been reading and writing since grade school. He loves telling stories and always dreamed of entertaining others with his writing. He is also very interested in the world of writing and publishing and loves talking with other writers and readers about the craft. In his spare time he loves to spend time with his family and watch Yankee, Giant, Knick and Ranger games as well as good movies and TV. shows.
Other Reviews:
Amazon
FYI:
Link to Chapter One
Posted by Unknown at 1:33 AM