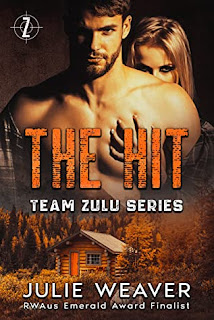 The author writes a female lead who is strong without being mean and is able to take care of herself but accepting help and isn't the stupid I can do it than get caught female.  The male lead loves her and accepts her.  The story is what readers expect from Romantic Suspense series that seems to have all the bad guys that you can imagine.

The story flows well the characters are well developed with a well placed story. Thank you to Netgalley for a advance copy of The Hit By Julie Weaver.

Former member of Team Zulu, a clandestine black operations unit, Elias “Shep” Shepherd believes the only use he has nowadays is taking out human scum on home soil. After years of harrowing military deployments, the one place he finds peace is at his remote Appalachian Mountain cabin, far from civilians and the world he doesn’t fit in anymore.

When Shep accepts a Mafia contract, he doesn’t expect his mark to be a woman, or the sexiest thing in grease-stained overalls he’s ever laid eyes on. She stirs something inside Shep’s battle-hardened heart. Despite the risks, he’ll do whatever it takes to protect her, even if it means breaking his no visitors rule at the cabin.

Muscle car mechanic Cameron McKenzie only needs one look at the towering wall of muscle who’s abducted her to know he’s a killing machine. Too bad for him, she’s not going down without a fight. Hidden away in his isolated mountain home, Cameron is reluctant to admit Shep might not be the heartless beast she thought he was. And as their mutual trust builds, so too does an intense attraction for her unlikely savior.

If the Mafia discovers Cameron is still alive, Shep will need every one of his elite skills to keep them both safe. Although he’s no longer sure which is more dangerous—The Mob’s demand for merciless retribution, or the woman who makes him wish he was worthy of her love.