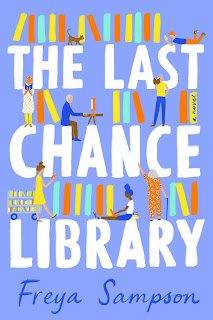 An endearing novel about the assistant librarian in an English village. Her life has been on hold since the loss of her mother from cancer numerous years prior. Her world consists of working as the assistant librarian (the job her mother previously held) and sitting in her mother's house and reading and rereading books. Her mother, or so it appears, was everything she is not. She is in a prolonged state of depression untill the library is under threat of closure. This fear and reality gradually begins to overcome the depression and makes her step out of her protective bubble. Will it be sufficient to change her life and save the library. This is a feel good story that was a  pleasure to read.

I have rated this book 4 stars and recommend it to everyone who enjoys a feel good story without violence or sex. Thank you Frank for your review.
I received an ARC from Netgalley for my unbiased review.
Synopsis:
Lonely librarian June Jones has never left the sleepy English village where she grew up. Shy and reclusive, the thirty-year-old would rather spend her time buried in books than venture out into the world. But when her library is threatened with closure, June is forced to emerge from behind the shelves to save the heart of her community and the place that holds the dearest memories of her mother.Joining a band of eccentric yet dedicated locals in a campaign to keep the library, June opens herself up to other people for the first time since her mother died. It just so happens that her old school friend Alex Chen is back in town and willing to lend a helping hand. The kindhearted lawyer's feelings for her are obvious to everyone but June, who won't believe that anyone could ever care for her in that way.To save the place and the books that mean so much to her, June must finally make some changes to her life. For once, she's determined not to go down without a fight. And maybe, in fighting for her cherished library, June can save herself, too.
Expected publication: August 31st 2021 by Berkley Books
About The Author:
Freya Sampson works in TV and was the executive producer of Channel 4’s Four in a Bed and Gogglesprogs. She studied History at Cambridge University and is a graduate of the Faber Academy. She lives in London with her husband, two young children and an antisocial cat. The Last Library is her debut novel.
Posted by H. Wimmer at 12:00 AM