Book Review: How to Train Your Earl (First Comes Love #3) by Amelia Grey 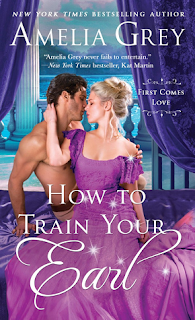 Title: How to Train Your Earl (First Comes Love #3)

An intriguing and easy to read  historical romance. While attendance a masked masquerade ball in Paris France a young English widow escaping from an overeager, unwanted, and under the influence, suitor escapes into an unlocked room. There she finds a semi dressed man bound to a chair. He requests her to release him so he can chase down and rescue his cousin who is eloping with a very unsuitable women. Move ahead some weeks later and the new Earl sees her again on a London street and realizes that he is quite smitten with her and seeks an introduction. Thus the chase begins with seemingly impossible stipulations set for him to meet. The question is whether or not he can maintain the discipline to win the lady's heart and hand in marriage.

I have rated this book 4 stars and would purchase it for friends who enjoy historical romance stories.

I received an ARC from Netgalley for my unbiased review of same. Thank you Frank for your Review

Brina Feld has settled into a life devoted to helping others since the sinking of the Salty Dove left her widowed. She has no need for a man in her contented life. But when the notorious and handsome Lord Blacknight returns and awakens her desires, her peace and serenity vanish. If she agrees to an alliance with him, she knows she will have to battle her heart to keep from being snared under his spell.Zane, the Earl of Blacknight, was never supposed to inherit the earldom, so he didn’t much care to lead a respectable life before then. Fistfights, card games, and drinking are the order of the day. Now he’s determined to change his rakish ways and he knows the proper lady who can help him. There’s just one problem: He's already bet he’ll win her hand before the Season is over. With her resolve to out-scheme him, how can he show her that his love is true?

Amelia Grey (aka Gloria Dale Skinner) grew up in a small town in the Florida Panhandle. She has been happily married to her high school sweetheart for over twenty-five years. She has lived in Alabama, Connecticut, New Hampshire and now lives in Florida.Amelia has won the coveted Romantic Times award for Love and Laughter, the prestigious Maggie award for best historical and Affaire de Coeur's best American historical award. She has been a finalist for the Golden Heart and the Holt Medallion awards which are given by Romance Writers of America and numerous other awards. Her books have been sold to many countries in Europe, Russia and China.Amelia likes flowers, candlelight, sweet smiles, gentle laughter and sunshine.