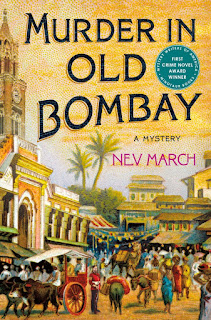 I always enjoy reading books, historical or otherwise, that are located in an area I have visited. This book is no exception as it takes me back to a beautiful area during the day of the British empire. The death of two wealthy young Indian ladies fails to be resolved by the British authorities and justice is not seen to be done. A recently retired Indian Captain, of the British Army, is hired by the husband of one of the ladies to investigate for a period of 6 months. As he begins to investigate a series of events unfolds which puts him on the right track to find the killer(s). The story is masterfully told and the descriptions, of both the locations and people, are vivid and believable. It makes you feel you, the reader, are there on the hunt for justice. The ending is both happy and sad at the same time. I will leave it to you to decide which is the one you feel.

I have rated this book 4.5 stars and recommend it to anyone who enjoys both mysteries and romance stories.
I was provided an electronic Advance Readers Copy (ARC) by Netgalley for my unbiased review. The above review is my honest review and is not influenced in any way.

In 1892, Bombay is the center of British India. Nearby, Captain Jim Agnihotri lies in Poona military hospital recovering from a skirmish on the wild northern frontier, with little to do but re-read the tales of his idol, Sherlock Holmes, and browse the daily papers. The case that catches Captain Jim's attention is being called the crime of the century: Two women fell from the busy university’s clock tower in broad daylight. Moved by Adi, the widower of one of the victims — his certainty that his wife and sister did not commit suicide — Captain Jim approaches the Parsee family and is hired to investigate what happened that terrible afternoon.But in a land of divided loyalties, asking questions is dangerous. Captain Jim's investigation disturbs the shadows that seem to follow the Framji family and triggers an ominous chain of events. And when lively Lady Diana Framji joins the hunt for her sisters’ attackers, Captain Jim’s heart isn’t safe, either.Based on a true story, and set against the vibrant backdrop of colonial India, Nev March's Minotaur Books/Mystery Writers of America First Crime Novel Award-winning lyrical debut, Murder in Old Bombay, brings this tumultuous historical age to life.

Leaving a long career in business analysis in 2015 she returned to her passion, writing fiction. She is a member of MWA, the Hunterdon County Library Write-Group and volunteers with non-profit organizations.A Parsee Zoroastrian herself, Nev lives with her husband and two sons in New Jersey. Murder in Old Bombay is her debut novel.