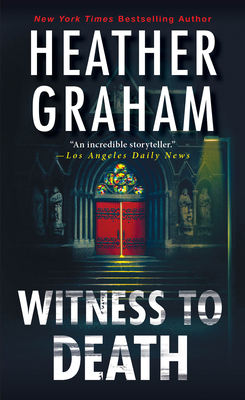 Review:
Heather Graham as always been a author I could go to when I need a mix of mystery, romance and book that I can't put down.
This book I put down a lot.  It was over sappy compared to the author other books I have read. It lacks the action and mystery that I have enjoyed from the author in the past.  Readers might struggling to be able to connect with the different characters that is the key to Heather Graham books she is able to get readers to connect with the different characters that will have readers needing more.
This time it felt disconnected, lack a flow and focus in the story.
I believe this book a is older one of her books but I am not sure.
Thank you to netgalley and the publisher for a copy of Heather Graham Witness to Death

Synopsis:
Lorna Doria hadn't committed a murder. She'd seen one. Yet somehow she'd become the prisoner, while the killer was out on bail. As state's witness, she'd thought the shelter of her quiet New England life would be enough to keep her safe. Law enforcement disagreed—and it was New York City undercover cop Andrew Trudeau's job to protect her. But their strong attraction had already made it too late for that . . .
Now, with Andrew as her bodyguard, Lorna has no choice but to accept his constant presence. She assures herself she can handle it, she's mature, not easily rattled—except by Andrew. They're as different as can be, yet something bonds them, something beyond the danger they face. But as a cop, Andrew's life will always be on the line, and Lorna must decide whether she can live with that—if a killer lets them have any future at all

About The Author:
Heather was a founding member of the Florida Romance Writers chapter of RWA and, since 1999, has hosted the Romantic Times Vampire Ball, with all revenues going directly to children's charity.She is pleased to have been published in approximately twenty languages, and to have been honored with awards frorn Waldenbooks. B. Dalton, Georgia Romance Writers, Affaire de Coeur, Romantic Times, and more. She has had books selected for the Doubleday Book Club and the Literary Guild, and has been quoted, interviewed, or featured in such publications as The Nation, Redbook, People, and USA Today and appeared on many newscasts including local television and Entertainment Tonight.Heather loves travel and anything have to do with the water, and is a certitified scuba diver. Married since high school graduation and the mother of five, her greatest love in life remains her family, but she also believes her career has been an incredible gift, and she is grateful every day to be doing something that she loves so very much for a living.
Posted by H. Wimmer at 12:00 AM