Review:   Nadia Wolf had one wish - to win the world poker tournament and collect the million dollar prize. The odd stack against her when celebrity porker champion Caleb Usher sits down at her table playing a game of mental poker.  As the tournament goes on the million dollar prize disappears in front of everyone on national TV.   Grayson Miller CEO of the casino works with Nadia to solve the mystery.

Nicolette Pierce is a self-published author who took me by surprise pulling the reader into the world of high stakes poker and a mystery that had me guessing until the thief was revealed. This book has it all humor, kick butt heroine, sensuality all mixed into to one great mystery.

Nadia is every girl’s best friend who can’t turn down a bet no matter the stakes because there is always a chance of winning. The male romantic characters are swoon worthy for any girl with heart beat but also realistic enough to make you wonder are they real. Nadia had me laughing so many time my kids wondered what was so funny.

For a self-published author I didn't find any grammar errors or for that fact really any spelling errors which I found extremely impressive.

If you have ever been to Vegas - so many parts of this book ring true and for those who have never gone this book will make you want to go.

I think Nicolette Pierce writes a great Romantic Suspense that keeps you guessing and willing to buy the next in the series without thinking twice.

Thanks go to Heidi for this review.

Synopsis:   Nadia Wolf had one wish, and it wasn’t for the latest designer purse, fashion-forward clothing, or even a handsome man to marry . . . although, that would be acceptable too. Her wish was to win the World Series of Poker tournament and collect the one million dollar prize, beating the arrogant men who make her professional poker career a daily challenge.

The odds were stacked against her when sexy poker celebrity Caleb Usher sat down at her table. As they pin their battles against each other, a steamy side wager drew them both in and gave them an even greater reason to fight for the championship. It only took one hand to make tournament history and leave them both hot under the collar. But before they could settle their spicy wager, the million dollar prize disappeared in front of an audience. Not one witness could explain what happened or where the money disappeared to.

Greyson Miller CEO of the Lost City Casino had a mystery to solve. Not only did a thief steal the million dollars from under his watchful eyes, but a secret swelled so large it threatened the very core of the casino. In a twist of fate, Nadia teams up with Greyson in an attempt to find the missing prize and to solve the perilous mystery that plagued the Lost City Casino. With Greyson’s overwhelming allure, Nadia has to keep both her head in the game and her hands to herself.

Will she be able unravel the mystery and find the lost prize money while keeping both Greyson and Caleb at bay? Can she fend off her fanatical self-appointed poker manager Frankie Garza before he flushes her career down the toilet in offbeat attempts to make her famous? With Caleb, Greyson, and Frankie all claiming a stake; Nadia’s career, her life, and her heart will never be the same again. 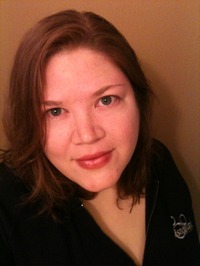 Author Information:   It's amazing that words come to my fingertips when I write my books . . . maybe not all the time :), but when it comes to writing a biography, I'm lost. To put it simply, I never thought I would write a book, let alone start a series. In fact, I've had to relearn grammar . . . okay, I might have been daydreaming through English in school to begin with. My report card always came back with "Good student but daydreams too much".

My day job is accounting and mommy duties. I guess I never thought I would be an accountant either when I finished my degree in TV & Video production. Life continues to amaze me as it twists and turns unexpectedly. My nights are free to wander into a world of my creation. I love to laugh and to find humor in daily life, so I hope my books have a few chuckles for you.

I value reviews and posts either here or on other sites. If it's a site that allows responses, I try to respond by the next day.