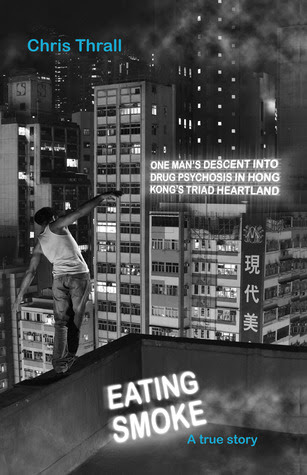 Review:   This book could be viewed several different ways: A cautionary tale, how to not succeed in business, how to choose your friends, or a guy doing stupid things with his life.

Chris Thrall joined the Royal Marine Commandos when he was 18 years old and throughout the years he earns his merits working his way up the ranks until the lure of business and money was to strong and he left for Hong Kong.

Chris moved to Hong Kong to expand a business that he built while serving in the armed forces.  Soon Chris's optimistic thoughts of the future turned sour and his business failed before it started. While trying to find a job he finds himself taking Meth to ease the pressures of loss.

Soon he finds many different jobs that he is hired and fired from.  Starting with a phone book scam, teaching English,  D.J and Bouncer and soon he is working for the Traid.  With each job he finds himself deeper and deeper into his drug addiction.  Chris was a cheerful optimistic person by nature but though drug abuse he seemed to always find the wrong people to spend his time with.  His days were seen though a drug induced haze which caused him to hardly ever sleep due to the effects of meth. He would see and hear things that may or may not have been real.

Chris keeps the book humorous while detailing what most people would find at the bottom of the barrel.  Ever job is perfect until the drug induced haze takes over and he fails again.

However there are times while reading the book the reader isn't sure what they are reading because of how paranoid Chris has become from the over use of drugs.  At several points in the book I felt like I was rereading the same chapter, because the same things seems to happen to Chris over and over again. However never once does the author tell you how he was able to kick the drug habit.  I personally feel that would make a great book and could help though who suffer from Meth addiction

The best line in this book is "I'm not a stupid guy, just an average guy who does stupid things."  Its true Chris is a smart guy but he does some really stupid things thought out this book.

Chris writes this book as he talks and certain points I could have had less swearing and I might have enjoyed this book a lot more.

Thank you Heidi for this review.

Synopsis:  Chris Thrall left the Royal Marines to find his fortune in Hong Kong, but instead found himself homeless and addicted to crystal meth. Soon he began working for the 14K, Hong Kong's largest crime family, in the Wanchai red-light district. Dealing with the 'foreign triad' - a secretive expat clique connected to the Chinese mafia - he had to survive in the world's most unforgiving city, addicted to the world's most dangerous drug.

Author Information:   Chris Thrall was born in Kent, UK. At eighteen, he joined the Royal Marine Commandos. Following active service in the Northern Ireland Conflict and training in Arctic warfare and survival, he earned his parachutist’s ‘wings’ and went on to serve as part of a high-security detachment onboard an aircraft carrier.

In 1995, Chris moved to Hong Kong to oversee the Asia-Pacific expansion of a successful network-marketing operation he’d built, part-time, while serving in the Forces. Less than a year later, he was homeless, hooked on crystal methamphetamine and working for the 14K, Hong Kong's largest triad crime family, as a doorman in Wanchai's infamous red-light district.

Eating Smoke, a humorous yet deeply moving first book, is his account of what happened . . .